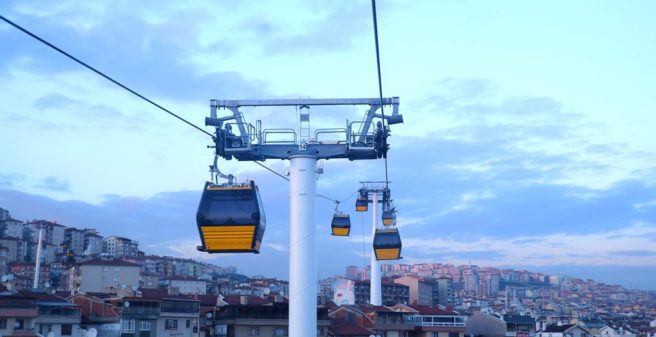 In a recently published status report, the Association of German Engineers (VDI) provides an overview of the areas of application, advantages and disadvantages of urban cableways, prepared by the VDI Technical Advisory Board for Railway Technology of the VDI Society for Vehicle and Transport Technology under the chairmanship of Univ.-Prof. Dr.-Ing. Nils Niessen and 14 other experts from universities, operators and consulting companies.

This provides city politicians, planners and transport companies with a decision-making aid when they are considering the introduction of new public transport systems. The technology, which is often used in tourist applications under extreme climatic conditions, is fully developed. The report shows in which applications urban cableways are useful to cover public transport tasks. On 28 pages, the report also deals in a concentrated form with the current state of the art, the possible transport performance, questions of the environment, safety and economy, comfort and accessibility, as well as those of urban integration. The report shows five application examples from different continents and concludes with thoughts on the involvement of the affected population in the decision-making process as well as a series of recommendations to the decision-makers. The appendix contains an overview of governmental and technical regulations and a bibliography.

The report has identified 64 urban cableway installations worldwide that went into operation between 1996 and 2018. The trend is upward. It shows the difference between aerial tramways and orbital ropeways, the former can carry up to 1200 passengers per hour and direction (PPHD), the latter up to 4000 PPHD. The relatively low construction and operating costs compared to other systems, the short construction times and the low environmental impact have a positive effect, as do the easy overcoming of height differences and urban planning obstacles, while on the other hand restrictions on the transport of wheelchairs, prams and bicycles have to be accepted.

Other VDI reports (in German):