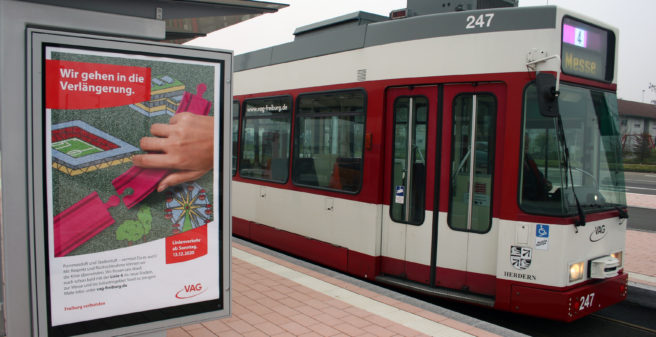 Since 13 December, the Freiburg light rail system is connecting the stadium, the trade fair centre and a commercial area I © VAG Freiburg

With the start of operations on 13 December 2020, the extension of the light trail extension to Freiburg’s fair grounds has been inaugurated l after almost two years of construction. This means that the trade fair grounds, the new SC football stadium and the northern industrial estate will be better served by the tram network of public transport operator Freiburger Verkehrs AG (VAG).

“We would have loved to celebrate the opening of the new section again with all Freiburg residents,” said VAG board member Stephan Bartosch, but unfortunately circumstances did not allow for this at the moment. “At first glance, the new piece of Freiburg light rail doesn’t seem particularly long or exciting, but that’s an illusion: with its highly complex stadium stop, the fairground approach and its low-lying position, it’s actually quite spectacular and unique not only in the Freiburg network.” Fellow board member Oliver Benz explains: “The tram extension provides optimal access to the trade fair centre and the stadium. But many businesses in the northern commercial area will also benefit from the line extension, partly directly and partly via good bus connections at the terminus.” Both board members wanted to say a big “thank you” to the funding bodies: “Without the financial support from the federal and state governments within the framework of the Municipal Transport Financing Act, projects of this kind would be much more difficult for German cities to manage. The grants from the city of Freiburg for the financing of the stadium stop are also an enormous relief and our thanks go to them as well.”

Freiburg’s Mayor Martin Horn puts the new section of track in a larger context: “In spring, the Freiburg city council decided on the priorities for the expansion of the light rail network for the next ten years. With this, we have set an example for public transport in Freiburg. The expansion of the light rail network is a central element on our way to the transport turnaround.”

The 970 metre long line, of which around 635 metres run on grass track, leads to the barrier-free terminus “Messe Freiburg”. The new “Stadion” stop along the route is one of the most technically sophisticated light rail stops in Germany, with three platforms in a row, 10 special points with overflow frogs and its own supervisory building. In regular operation, trams only stop here in the direction of the city centre. When SC Freiburg plays home games in its new stadium, trams also stop in the out-of-town direction.

Another special feature of the new section of line is that it is run at a low level over a length of a good 300 metres past the airfield. The retaining wall required for this is adorned with what is probably Freiburg’s largest work of art: the wall was designed throughout by Freiburg graffiti artist Tom Brane. Cityscapes and natural landscapes, sights and everyday scenes, people, animals and objects, moods and feelings – in short, everything you can see when looking out of the tram window is depicted on the wall, which is between 50 centimetres and 1.8 metres high. Football motifs predominate on the supervisory building at the stadium stop.

The inauguration of the new alignment can be seen here on video with a CAF Urbos low-floor tram:

The route ends in a turning loop with two points and a track crossing, in the centre of which a technical and social building with driver lounges has been built. In addition to 76 Park&Ride spaces, a bus interchange and a Frelo station have also been built. Here, bus services from the city and the surrounding area are linked with the Freiburg light rail network.

From the turning loop, a wide crossing with traffic lights crosses Madisonallee in the direction of the exhibition grounds and the Sick Arena.

The total costs of the project, which was partially financed by federal and state funds, are around 17.6 million euros. Of this, around 4.3 million is accounted for by the subsequently planned stadium stop. The Stadtbahn Messe is part of the overall light rail project Vauban, Rotteckring and Messe and is subsidised by federal and state funds with 85 per cent of the eligible costs. The stadium stop is 50 percent funded by the state. The rest is borne by the city of Freiburg.

The Messelinie is divided into two construction sections: The first branches off from the existing light rail network at Robert-Koch-Straße and runs via Breisacher Straße and Berliner Allee to Hermann-Mitsch-Straße. The second construction section will later connect via Breisacher- and Friedrichstraße to the Victory Monument. However, this section is still in the planning stage – in particular, the extremely complex crossing over or under the railway line means that construction is not expected to start soon.

The “Stadion” stop is only used for SC Freiburg home games. Then the outbound trains change to the opposite track at the stop and let the passengers get off on the left side.

A guidance system has been developed for football fans travelling home by tram. Coming from the stadium, passengers can choose one of three corridors about 100 metres before the stop. At the entrance to each corridor is a sign indicating the direction of travel of the trains waiting there. From the elevated control centre, VAG traffic controllers coordinate the action. The northern of the three stops in a row is the regular stop of line 4. The regular vehicles will also stop here on match days, and they will be able to overtake the vehicles still in front of them if necessary.