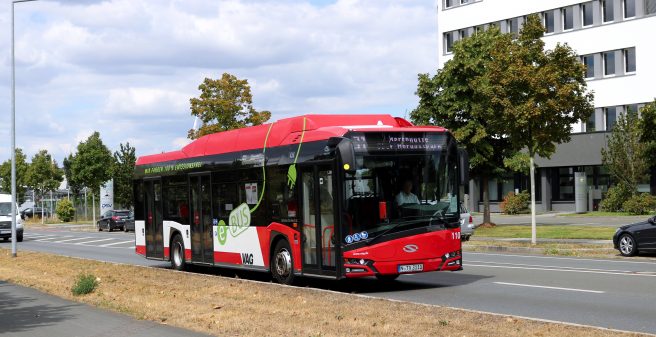 Nuremberg’s public transport operator, the Nürnberger Verkehrs-Aktiengesellschaft (VAG) has ordered six electric buses from Solaris. These are not the first electric buses in Nuremberg. Since last year, two Solaris electric buses have been tested in the Nuremberg Fürth area. The six new Urbino 12 Electric will be delivered in December 2019.

VAG Nürnberg and the Infra Fürth Verkehr GmbH from Fürth had ordered two new Solaris Urbino 12 electric in April 2017. The two e-buses were delivered at the end of 2017 and started operation in 2018. The buses have a 240 kWh battery each and are fully electric. Both vehicles are equipped with the plug-in charge and are charged in the bus depot.

According to local media, the VAG are already very satisfied with their first electric bus. The range of about 200 kilometers are sufficient for 80% of all bus lines and the relatively short recharge time of 1.5 hours allows for a operational integration and recharge during the day.

Compared to the test vehicle, the new series vehicles will be equipped with more efficient air conditioning and heat pumps in order to reduce power consumption at extreme temperatures (i.e., hot and cold days).

VAG has also applied for funding within the e-mobility framework of nationwide electric bus subsidies to finance the procurement of 52 electric buses and respective charging infrastructure to be delivered by 2022. The current order for six electric buses was partially funded by the Government of the Middle Franconia.