VDV Electric Bus Conference and exhibition – The Vehicles on display 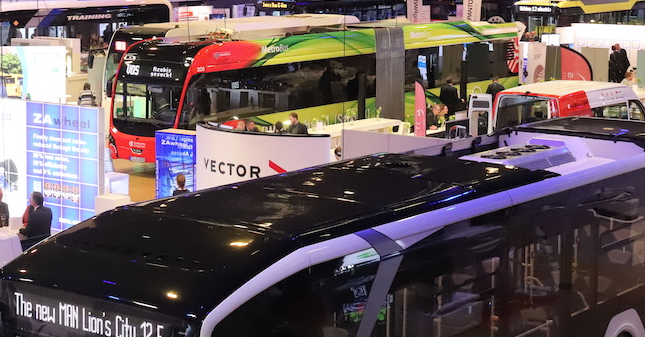 Electric and emission-free urban buses are being introduced worldwide. According to Germany’s public transport association VDV, there are around 400 electric buses in operation in Germany and another 750 on order. In order to discuss the progress, challenges and future development of the sector, the German public transport association VDV organized the Electric Bus conference in Berlin for the 11th time from 4 until 5 February 2020. Around 70 national and international manufacturers and suppliers presented the latest developments in terms of emission-free buses, technologies and technical solutions. During the two-day event, around 700 visitors came to the conference and e-bus exhibition. The VDV Electric Bus conference has been organized by the VDV, together with the Forum for Transport and Logistics, DEVK Insurance and the National Organization for Hydrogen and Fuel Cell Technology (NOW). The latter is the coordinating partner of the German Ministry of Transport for Fuel Cell and Electric Mobility funding projects.

Let’s have a look at the 16 electric and emission-free buses on display.

Alstom showed its Aptis electric bus. After extensive testing in many French and European cities for the past two years, the serial design of Alstom’s 100% electric mobility solution incorporates feedback from passengers and transport operators. The start of operation of the first serial Aptis will start on 24 February 2020 in Strasbourg on a Bus Rapid Transit (BHNS, Bus à Haut Niveau de Service). The 3.2 km line H links the central station with the European parliament. In comparison to the protoypes, the weight has been further reduced by 15%. In combination with the use of new, more efficient and state of the art batteries, the range has been increased. A new air-conditioning system that (fully electrical heat-pump) maximises thermal comfort and the panoramic rear lounge has been enhanced to give a feeling of increased space. The new hydraulic suspension allows superior comfort and sound insulation.

Aptis is particularly popular in France, where it is also built. It has already been chosen by Paris in the context of Europe’s largest call for tender for electric buses, as well as by the cities of Strasbourg, Grenoble, La Rochelle and Toulon.

BYD is the world’s biggest manufacturer of electric buses. Since 2010, the company has produced over 50,0000 electric buses with iron phosphate Li-Ion batteries (LiFePo). A large portion of the buses is running in Chinese cities, but the company also delivered electric buses to London, Landskrona in Sweden, France, the Netherlands, Spain and Houston, USA. The first electric BYD buses in Germany will start operating in Bochum from summer 2020 on and run on route 354 in Bochum, route 380 in Gelsenkirchen, and in Herne. The 12 meter e-buses can carry up to 80 passengers and have a single charge range of more than 200 kilometers with air conditioning.

Ebusco also presented the Ebusco 3.0 which even has range of 500 km thanks to light weight design by using composite materials. The first series vehicles will go into production in Deurne, Netherlands in mid 2020. As one of the first operators in Germany, Munich is already operating 6 Ebusco e-buses on line 100 with a further 2 + 16 e-buses on order.

Daimler presented its 12 meter eCitaro electric bus which has entered in operation in numerous cities in Germany and other countries during the past 12 months. The 18 meter version will be presented later this year. As the only electric bus to date, the eCitaro will even bear the coveted “Blue Angel” eco badge. This is to certify the eco-friendliness of the eCitaro and the sustainable way towards locally emission-free public transport. The Blue Angel is an environmental label awarded in Germany since 1978 for particularly environmentally friendly products and services.

e-troFit is a subsidiary of the Garching-based development company in-tech. For many years, in-tech has been doing development activities for leading automobile manufacturers. Since 2016, an in-tech innovation team has been working e-mobility. In order to launch these activities, in-tech founded its subsidiary company e-troFit GmbH in 2019. The Ingolstadt-based company is now responsible for the development, series production and distribution of the e-troFit solution.

e-troFit presented its converted Citaro electric bus which used to be a diesel bus. According to the manufacturer, the conversion is much cheaper than the procurement of new vehicles. Depending on the condition of the vehicle and the extent of the work, the conversion can cost between 300,000 and 350,000 Euro per bus. This is about half the price of new electric buses.

Step by step, Irizar is conquering the European e-bus market. The Spain-based manufacturer is already present in various countries. In Berlin, Irizar showed one of 14 x 18 m ie bus of the operator Voyages Emilie Weber. The buses have been delivered in 2019 and joined the seven 12 m Irizar ie bus units that were already in service in Luxembourg. The 18 m articulated buses have a capacity of 525 kWh and are re-charge over-night in the depot. Later this year, Irizar will also deliver 10 e-buses to Rheinbahn, Düsseldorf. The company will also deliver 47 articulated buses for an electric bus system in Schaffhausen, Switzerland.

I see electric busses presented its converted electric bus which will be operated by Autokraft/ DB. The start-up offers to convert existing diesel buses to electric buses and is close to sign first orderts. After the Premiere of the first upgraded MAN bus at the Busworld in Brussels in October 2019, the bus has now been shown in Berlin and will get TÜV approval soon,

The bus is a 12 m long MAN Lions, built in 2011, however it is in excellent state. The state of Schleswig-Holstein has financially supported the conversion of the first MAN bus. The energy consumption per kilometer will be well below 1 kWh. Further conversions are planned. Numerous cities from all over the world, including Vienna, Hong Kong and Bangkok, have a concrete interest in the conversion of diesel buses to electric drives.

The Turkey-based manufacturer is one of the new-comers in terms of e-mobility on the European markets. Together with BMW I Technologie, the company developed a 6 m minibus which is literally using BMW batteries. Karsai is also developing the Atac Electric, based on its Diesel variant. The 8 m minibus features five battery packs of 44 kWh each, totalling 220 kWh allow for a battery range of 300 km which should be sufficient for urban circulator bus lines.

MAN Truck & Bus exhibited two emission-free vehicles for urban public transport. In addition to the fully electric MAN Lion’s City E city bus, visitors were able to see the MAN eTGE as a service vehicle. The electric van gives operators of bus fleets a solution for local emission-free operation of their internal vehicle fleet. In mid-December, MAN Truck & Bus delivered the first two electric buses to Hamburger Hochbahn AG and Verkehrsbetriebe Hamburg-Holstein GmbH for everyday use in the Hanseatic port city. At the VDV electric bus conference in Berlin, MAN will be presenting the 12-metre solobus version of its fully electric Lion’s City E, which can accommodate up to 88 passengers, to industry representatives. The central motor is located on the rear axle. In the solobus, the fully electric driveline produces between 160 kW and a maximum of 240 kW. The energy comes from the batteries consistently located on the vehicle roof, which have an installed capacity of 480 kWh. Here, MAN can rely on the highly developed battery cell technology from the Group’s modular kit.

As part of the e-mobility roadmap, in 2020 an eBus demo fleet consisting of 15 test vehicles will be used by customers in five European countries. During 2020, e-bus test vehicles will be seen in Germany, France, Luxembourg, Antwerp and Barcelona. The first series production MAN Lion’s City E 12-metre solobus version is then set to be delivered to customers in the second half of 2020. This will be followed around six months later by the fully electric Lion’s City E articulated bus version, which is set to start series production in the first half of 2021.

As a supplementary solution for emission-free operation of transport companies’ internal fleets, MAN will also be exhibiting a fully electric eTGE panel van version at ElekBu 2020. It can be used as a maintenance vehicle for scheduled service vehicles in local public transport, as is already the case for Berliner Verkehrsgesellschaft (BVG) and Stadtwerke München (SWM).

The CAF-owned company is one of the leaders in the European e-bus market. Only in 2019, Solaris secured order for over 500 electric buses such as for Berlin (BVG), Milan (ATM) and Warsaw (MZA). Solaris’ „best seller“ is the 12 m Urbino Electric. Just before the conference in Berlin, Solaris announced that it will launch a 15 meter Urbino LE electric by the end of this year. The target market will be the Scandinavian market. At the same time, Solaris is also offering other alternative propulsion systems such as fuel cells and CNG.

Tribus, a dutch company, is developed the city’s Movitas. The Movitas is a 100% electric citybus which is extremely lightweight and equipped with modular battery packs, allowing for opportunity charging (pantograph) or depot charging (CCS plug). Thanks to its modular structure, the Movitas is available with a length of 8.20 m, 8.95 m or 9.70 m. Serial production will start in 2021.

Alongside the Movitas Tribes showed its VW e-crafter which is a wheelchair minibus. The VW e-crafter has 8 seats and spaces for up to 2 wheelchair places with a range of up to 150 km. 2 fully integrated wheelchair lifts and a lowered front entry for persons with reduced mobility.

Van Hool showcased its latest Fuel Cell bus A330 FC which has been delivered to Wuppertal and Cologne in 2019. The first hydrogen Bus Rapid Transit system, operated with Van Hool buses, entered operated in Pau, France, in December 2019. The 10 hydrogen buses in Wuppertal are operated with Ballard fuel cells, fuelled by hydrogen electrolyseur at the depot. The buses have length of 12 m.

VDL, one of the market leaders for e-buses in Europe, showed its latest 18 m electric Citea for Osnabrück. The city in Westphalia inaugurated its first e-bus line in March 2019 with 13 articulated Citeas. A further 62 Citeas have been ordered in July 2019. 22 e-buses will be delivered in mid-2020 for operation on lines M2 and M3. In 2021 a further 27 Citeas will follow for lines M4 and M5. Re-charge will take place via opportunity charging at the terminus and over-night in the depot. The articulated e-buses have a battery capacity of 216 kWh.

[…] VDV Electric Bus Conference and exhibition – The Vehicles on display […]