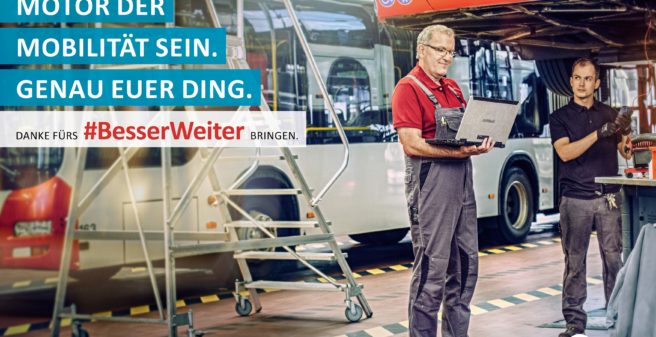 Corona and public transport: During the lockdown – and for one or the other passenger probably because of a certain worry about getting infected – the number of passengers dropped drastically. Many transport companies reported that after several years of rising passenger numbers, suddenly only 20 percent (one fifth) of the passengers were taking buses and trains than before the pandemic. The number of passengers is now increasing again, but we are still a long way from the initial numbers.

The Association of German Transport Companies (VDV) wants to take action. And so the campaign “Better to continue” (in German: “Besser weiter”) started. The campaign has been kicked off on 29 July in Düsseldorf. The objective is to gain confidence from users and the general public during the Corona crisis.

The reasons for the campaign

After years of boom of public transport in North Rhine-Westphalia and nationwide, passenger numbers have rapidly dropped. At the moment people use their bikes a lot more and even one’s own car has become significantly more attractive again.

Municipalities had to balance for the loss of income from ticket sales and transport companies were facing major challenges. They are particularly drastic in rural areas. Here, operators are missing around 20 million euros less for the sale of tickets daily.

The numerous private bus companies that often operate as subcontractors for municipalities to provide services and often for who are responsible for school traffic are hard hit.

What is the plan?

First of all, the current local transport offer despite the current corona crisis should not be restricted. “That would be,” according to the VDV, “the worst thing we could do now. We could with it maybe temporarily fill one or the other financial hole. But the passenger we are missing won’t be back anytime soon.”

Therefore, according to the demand of the VDV, not only should the services not be restricted, but the offer should be quite the opposite to be further expanded. “We want to get back to normal as soon as possible and re-connect to the passenger numbers from before the pandemic.”

The campaign consists in marketing messages with a series of photos showing passengers with masks. A second phase of the campaign with the objective to gain passengers back will start in September.

In addition, so the clear message of the event, it is absolutely necessary necessary to (further) advertise for the use of public transport. And it is important to make passengers feel safe when using the bus and train and show that there is no risk to get infected on public transport. This includes, however, that the corona precautionary rules are adhered to which are the following: