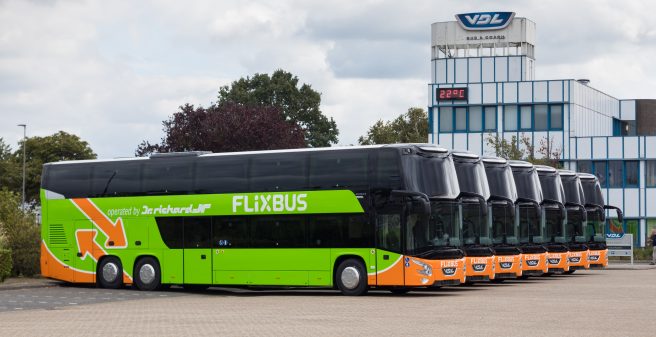 The Dr Richard Group from Vienna, Austria’s largest private transport group, has procured eight double-decker buses from VDL for its latest branch in Munich. The vehicles of the type “Futura FDD 2-141 / 2500” will be used in the long-distance traffic of Flixbus and therefore also carry the Flixbus livery.

Dr Ludwig Richard founded his company in 1942 in Vienna. First, he ran trucks which were all lost without exception until the end of 2nd world war. To restart, Dr Richard switched to buses because he had noticed that there was a lack of vehicles for passenger transport. His first “buses” were still extremely straight forward and pragmatic: Richard got himself trucks, on whose cargo areas he bolted benches. On 17 March 1946, Dr Richard concessioned the first line to his company (Jennersdorf in Burgenland – Vienna).

Very quickly, Dr Richard invested into the appropriate type of coaches for passenger transport. New vehicles were delivered from Austrian manufacturers. The company grew, and Dr Richard also took over used buses, many of which, for example, came from the Hamburger Hochbahn. There they had been used as a more comfortable “express busses”. Today, the Richard family is proud to be the largest private business enterprise in the German-speaking area, run by the owner family.

Gradually, the group took over a large number of other bus companies throughout Austria.

Albus Munich, the youngest acquisition of the Richard Group, is a partner of Flixbus. The company has 65 employees who are working with 30 buses. The new bi-level buses from VDL will also be stationed in Munich. They are to be used on the Flixbus line Munich – Zurich, for which they have 74 seats.