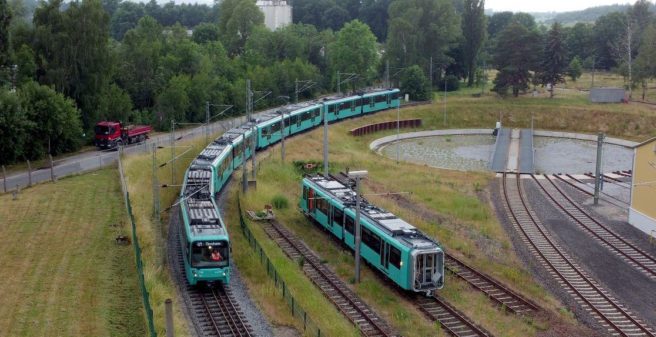 On Friday, 9 July 2021, Frankfurt’s underground fleet grew: the first of a total of 24 new-style U5 centre cars was presented and put into service. VGF will receive 23 more vehicles by the end of 2022. The first two units have been delivered. The manufacturer is Bombardier Transportation, which now belongs to the Alstom Group. The vehicles are manufactured and tested at the Bautzen plant in Saxony.

A video about the new middle sections and train combinations is available here:

The vehicles are middle sections of the “U5” series, of which the VGF put a total of 224 into service between 2008 and 2017 in different variants – as 25 and as 50-metre-long units. They now run on all nine metro/ light rail lines. The new middle units, which offer 48 seats and 136 standing places, are 25 metres long, have three bogies, two of which are powered, as well as an articulated joint in the middle, are air-conditioned and have their own pantograph. Instead of driver’s cabs, they are equipped with two emergency driver’s stands. With these, they can be driven and shunted with an assistant driver’s cab, but in fact they are intended to be integrated into existing train formations and to extend the trains to 75 or 100 metres in length. A 75-metre train composed in this way offers 140 seats and 432 standing places, a 100-metre train 186 seats and 580 standing places. Thanks to the close couplings, these vehicles can be walked on continuously and over their entire length, which offers a new passenger experience and gives Frankfurt the world’s longest light rail vehicle.

Expansion of the metro fleet and network

The dimensions and equipment of the six-axle vehicles correspond exactly to those of the “U5” trains with which they are to be coupled. As high-floor vehicles, their floor is 87 cm above the edge of the rail; like all light rail trains in Frankfurt, they require appropriately constructed platforms for barrier-free boarding and alighting. Four wide doors on each side ensure that passengers can change quickly.

The main motivation for the procurement is the sharp increase in passenger numbers in the years before Corona. The number of passengers on the section of underground lines U1, U2 and U8 between Eschenheimer Tor and Konstabler Wache increased by 45% between 2010 and 2017 alone, while on underground lines U4, U5, U6 and U7 the increase on the main axes was between 14 and 17%. Tram passenger numbers are also following this trend, leading to the order of extended low-floor trams of the new Type T from Alstom. We reported here.

In addition, VGF or its project companies are planning the following extensions for which additional vehicle capacities will be required:

Deployment on U4 and U7 from December onwards

The first two vehicles with the numbers 1951 and 1952 will be subjected to a so-called type test by the VGF in the coming weeks, as they have been delivered with new software. After successful testing, further vehicles are to be delivered in a 14-day rhythm; the first trains with centre sections are then to be in passenger service for the timetable change in December.

The plan is to deploy eight four-car trains (length: 100 metres) and seven three-car trains (length: 75 metres) from the East depot on the U4 and U7 lines. If possible, the VGF will not uncouple these 15 train sets, but will keep them in service in their unchanged composition.

“With the expansion of the vehicle fleet, we are investing in the future,” says Head of Transport Klaus Oesterling. “We are ensuring attractive and efficient public transport in Frankfurt in order to be able to offer modern and sustainable mobility for as many passengers as possible in the future. Especially because we expect many car drivers to switch to metros and trams as part of a mobility turnaround.”

“With our new U5 carriage centre sections, we can increase our transport capacity in a simple, economical way, as we are using a vehicle generation that is already in use and do not have to make any adjustments to stations or workshops,” adds VGF Managing Director Michael Rüffer. “In addition, feedback on the 50m U5 car already in use shows that our passengers like longer vehicles that can be walked on throughout. We are happy to comply with this request.”

“We are very pleased to be able to support VGF in the expansion of its mobility services with the new ‘U5’ centre cars as part of our almost 20-year partnership,” says Dirk Wunderlich, Vice President Urban Transport at Alstom in Germany. “The modular concept of our proven Flexity high-floor vehicles is successfully applied here. The expanded capacity will bring even more passengers safely and comfortably to their destination in the future.”