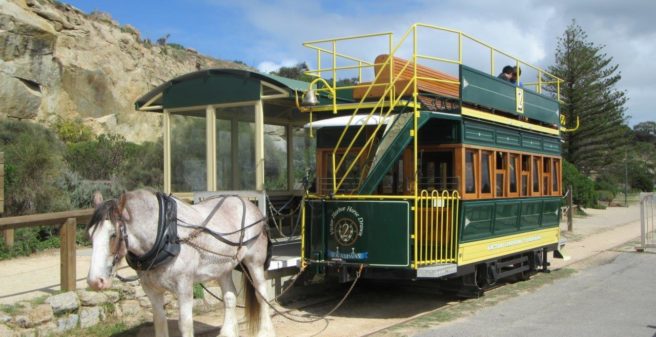 It is for sure a tourist attraction but at the same time a means of transport for everyday use – the horse-drawn tramway of Victor Harbor in Southern Australia. Victor Harbor, a small town with a population of about 10,000 inhabitants, has an urban horse-drawn tramway company that provides daily connections from the city centre station via a 630 meter long, wooden bridge to Granite Island. In 1864, the wide-gauge railway of Goolwa reached the town of Victor Harbor. In 1867, the line was extended for freight traffic to Granite Island, where by horses the railway wagons were pulled due to limited weight restrictions of the bridge to the island. In order to meet the demand for passenger transport, passenger service on the horse-drawn railway was introduced in 1894 with double-deck carriages. The operation was able to remain unchanged until 1956 and even after the shutdown, the infrastructure remained intact. Repeatedly plans to reopen the line came up, and in 1986 it operation resumed with 4 new vehicles built according to the old model.

Near the station, a track connection to the wide-gauge (1600mm) Goolwa railway line – Victor Harbor is still in place. The connection to the depot and the station is only served as a service track – the regular trains of the horse-drawn tramway start at Victor Harbor tram station at the bridge over the bay. On Grenite Island there is the only operational passing loop of the route – the switches are typical of the horse tracks of the 19th century without moving parts, the direction of travel is determined by the direction of the horse. After 3.1 km, the route ends at the jetty in the middle of a natural reserve with diverse wildlife. Frequence of service usually is every 60 minutes – in high season every 40 minutes. Victor Harbor is easily accessible from Goolwa by train (3-5 pairs of trains) or from Adelade by bus – the ride on an active horse-drawn railway in beautiful surrounding is an unforgettable experience !