VRR and NWL order over 60 battery multiple units from CAF 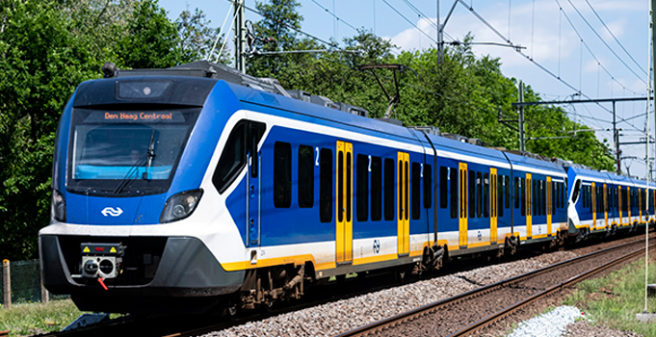 The political bodies of the two regional passenger transport authorities Verkehrsverbund Rhein-Ruhr (VRR) and Nahverkehr Westfalen-Lippe (NWL) in the Rhein-Ruhr/ Westphalia region have decided in their meetings to award the contract for the delivery and long-term maintenance of more than 60 battery-electric vehicles to CAF (Construcciones y Auxiliar de Ferrocarriles, S.A.). After a 10-day objection period, the Spanish company is to be awarded the contract for the delivery of the vehicles and a maintenance and availability contract lasting a good 30 years. CAF submitted the most economical bid in the Europe-wide tender procedure in terms of delivery, maintenance and energy consumption over the life cycle.

The vehicles of type “Civity BEMU” will be delivered in two sizes with a seating capacity of 120 and 160 seats respectively, which will enable significant capacity increases on many lines of the Niederrhein-Münsterland network which are today operated with diesel trains. The vehicles are battery-electric vehicles. These are classic electric vehicles that are additionally equipped with batteries to bridge the non-electrified line sections and to be able to recharge the batteries under the overhead line. For CAF, this is the first order for mainline vehicles in Germany. CAF has already delivered regional light rail vehicles for the Schönbuchbahn in Baden-Württemberg as well as low-floor trams for Freiburg/ Breisgau. Just last week, the Ruhrbahn in Essen/ Mülheim ordered 51 high-floor light rail vehicles from CAF.

When procuring the trains, VRR and NWL once again placed great emphasis on qualitative aspects for increased travel comfort. For example, the vehicles are equipped with spacious boarding areas to ensure a speedy change of passengers. The comfortable seats, arranged in rows and in vis-à-vis seating groups, have a significantly higher seat spacing compared to the vehicles currently used on the lines. Of course, the vehicles are equipped with spacious and spatially separated multi-purpose areas for wheelchair users and bicycles, prams, etc., which can be reached at ground level from 76 cm high platforms. Folding tables, power sockets and free WLAN are available for working on the move. vehicle manufacturers submitted numerous optimisation proposals and thus contributed to the successful implementation of the procedure. VRR board spokesman Ronald R.F. Lünser is pleased with the result: “With the NRW-RRX model, we have once again succeeded in motivating vehicle manufacturers to design or further develop maintenance-friendly and energy-efficient vehicles.” The so-called NRW-RRX model is a vehicle financing model developed by all public transport authorities in NRW. In a Europe-wide negotiation procedure, a contract partner is sought who not only supplies the vehicles but also maintains them for 30 years. The future operators of the lines will be sought in separate award procedures and have not yet been determined. The vehicles will be provided to the railway undertakings for the provision of the transport services. This model was used for the first time for the vehicles of the Rhein Ruhr Express (RRX). With the use of electric vehicles, the share of diesel kilometres in local rail passenger transport in the VRR area will drop to less than 10 percent. “If we were to use diesel vehicles again on the lines of the network, they would emit around 24,000 tonnes of CO2 per year. The new electric vehicles are not only quieter, they also emit no particulate matter and no nitrogen oxides,” Lünser continued. “With this forward-looking vehicle technology, we are making a significant contribution to climate protection and offering an environmentally friendly incentive to switch from private cars to rail,” emphasises Joachim Künzel, Managing Director of the NWL. “This brings us closer to our goal of gradually doing away with diesel vehicles in the NWL area in the coming years.”

Background information about the Niederrhein-Münsterland network:

The Niederrhein-Münsterland network comprises seven lines with over six million train kilometres of traffic per year:

With the award of the contract for vehicle procurement, an important milestone has been reached in the overall project “Niederrhein-Münsterland-Netz”. As part of an overall reorientation on the routes of the network, VRR and NWL are pursuing several goals together with the state of North Rhine-Westphalia and the project partners: In addition to the conversion of the drive technology to locally emission-free vehicles, the focus is on the renewal of the infrastructure (including interlocking technology, extension and elevation of the platforms, renewal of the stabling facilities). With the deployment of the new vehicles, capacity expansions will be possible through longer trains with more seats as well as through an additional line between Geldern, Krefeld and Neuss, which will meet the above-average increase in passenger demand on some routes. In addition, the vehicles will run via the Niederrheinbahn line to Kamp-Lintfort, which is to be reactivated, and connect the university location to the SPNV network.