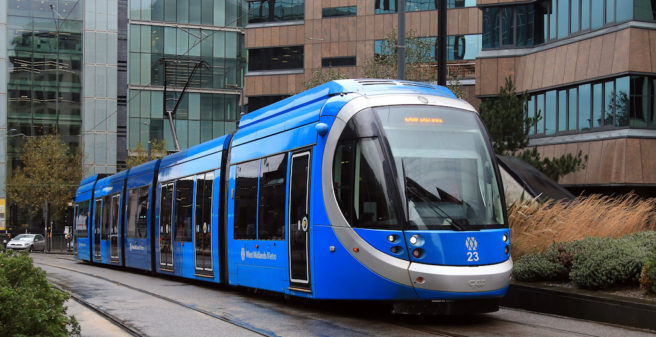 Services on the West Midland Metro were suspended indefinitely from 13 November 2021 following the discovery of further cracks in the CAF built trams.

Cracks have also been reported in other cities where the CAF Urbos 3 trams are used. In Sydney, this led to the suspension of the L1 tram line (Dulwich Hill Line) since November for a period of 18 months. Similar cracks in the bogies have also occurred in Newcastle (Australia) and Belgrade, leading to the closure of the fleets.

Cracks were initially discovered in a number of vehicles in June 2021 and services were suspended for a short period while all vehicles were checked. A reduced service then resumed between Birmingham Bull Street and Wolverhampton with the Birmingham city centre section remaining closed for construction works. This was completed on schedule for a planned re-opening at the end of October but, despite trams being tested on the new trackwork, no date was set for services resume. The current suspension is expected to last a minimum of four weeks. Local press reports indicate that other operators of similar CAF trams are also experiencing similar issues.

The construction works in Birmingham city centre have included the installation of a delta junction for the extension to the city’s HS2 station and Eastside together with the renewal of trackwork to sub-base level along Corporation Street. The latter had deteriorated significantly within five years of opening. Work also continues on the extensions at each end of the existing line, to Edgbaston (Birmingham Westside phase 2) and the new railway station in Wolverhampton. Both are expected to open in 2022. The Edgbaston extension features a short section of grass track at its terminus where overhead wiring has also been provided, the remainder being a continuation of the battery operation introduced on the first phase. In addition to the installation of the delta junction, preparatory work for the Eastside extension is now progressing at various locations across the city centre.

On a more positive note, in the latest UK Government City Region Sustainable Transport Settlement, West Midlands Combined Authority has been awarded over £1bn over five years for a wide range of projects including early planning and development work on four further Metro extensions.

Update: The main section of the line between Wolverhampton and Bull St. Birmingham was reopened on 15 December and is operated with the already repaired trams. In addition, the first of the 21 newly ordered CAF Urbos 3 low-floor trams are in delivery and will also be successively deployed. So far, the fleet consisted of 21 CAF Urbos 3 in the five-car version.

We reported about the history and expansion plans of the West Midlands Metro here:

CAF are reported in The Sydney Morning Herald to be alleging that the cracks in Sydney Urbos trams are due to the curving line and drivers approaching curves at too high a speed. Are they making the same claims in all cities with cracking issues?????