World Bank Financing for the expansion of Tramway Casablanca 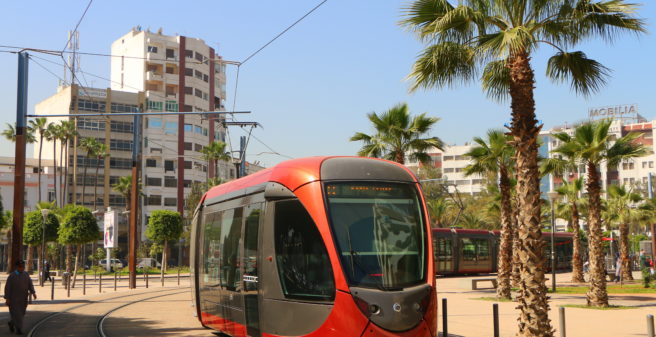 A USD 100 million loan agreement with the International Finance Corporation (IFC), a subsidiary of the World Bank, enables the Casablanca-Settat region to complete the fundinf of the construction of new lines T3 and T4 of Casablanca’s successful tramway system. The agreement has been signed on Thursday, January 23. It includes also financing for the modernization of various rural roads surrounding the city.

Casablanca’s new tramway system started operation seven years ago, on 12 December 2012, and has been substantially expanded on 25 January 2019. Since then, two lines totally 47 route kilometers provide reliable service to the 3 million inhabitants of the city.

Proposed new tramway Line T3 will have a length of 12.5 kilometers and a total of 20 stations. It will start at the tramway depot at El Hantate in the Sidi Othmane district, to continue on the following stops: 10 Mars Boulevard, Abdelkader Sahraoui Avenue, Driss El Allam Boulevard, Driss El Harti Boulevard, Mohammed VI Boulevard, and Mohammed Smiha Street, finishing at the Casa Port train station. It will pass across very densely populated areas as well as commercial parts of the city, including Lalla Meriem neighborhood, Sbata districts, Garage Allal, and Derb Omar, in addition to the Casa Port train station.

Construction works is to be awarded shortly, and both lines are expected to be operational by 2022 and 2023. The current fleet of Alstom Citadis running in coupled pairs is to be significantly expanded as well.

The current network of the tramway is visualized here: