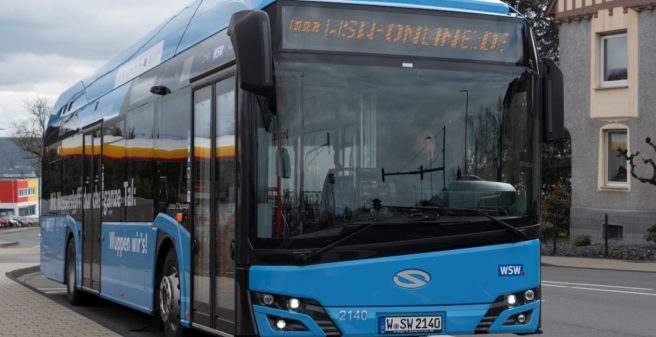 Without recharging, fuel cell buses allow for greater ranges than pure battery buses, but are more expensive to procure and operate – according to the common opinion of many market players and observers. In this context, the statement just published by the German operator Wuppertaler Stadtwerke (WSW) may well come as a surprise. One year after the start of regular operation of its fuel cell buses, WSW draws a thoroughly positive balance. “In daily service, our hydrogen buses already cost no more than diesel buses,” says CEO Markus Hilkenbach, “and they have proven their reliability even in the lowest temperatures during last winter.”

Against this background, WSW is expanding its hydrogen infrastructure. A dedicated hydrogen filling station is being planned at the Varresbeck depot in the west of Wuppertal. Well-known national and international companies have submitted bids in response to the Europe-wide invitation to tender. “The second filling station will make our growing hydrogen fleet more flexible in use,” explains WSW Mobil Managing Director Ulrich Jaeger.

The hydrogen project of WSW Mobil GmbH started in June 2020. The vehicles are refueled with hydrogen obtained from the waste of Wuppertal citizens. The hydrogen is produced in an electrolyzer at WSW subsidiary AWG, which is powered by electricity from the Korzert waste-to-energy plant. Ten fuel cell buses supplied by the Belgian manufacturer Van Hool are currently in operation. Depending on the line, they operate daily routes of up to 280 kilometers. See also our report at:
https://www.urban-transport-magazine.com/en/rvk-cologne-and-wsw-wuppertal-investing-together-in-hydrogen/

In addition, fuel consumption is important for the long-term economic consideration. While only around 8 kilograms per 100 kilometers were consumed in the summer months, the figure rose to over 10 kg on the coldest winter day at -16 degrees Celsius. The buses consumed an annual average of 8.7 Kg/100km. “As a result of the German CO2 levy, we are thus already reaching diesel level in terms of refueling costs this year,” Jaeger said. It becomes quite evident that the government’s tax policy and market control thus has a significant influence on this cost comparison. And, of course, access and availability to hydrogen at local level plays an important role in the business model, too.

With their range of 400 kilometers and rapid refueling vcapacity, hydrogen buses are superior to battery-powered electric buses, as per WSW’s opinion. Hilkenbach hopes for a significant price degression in vehicle procurement: “Within the past 12 months, prices have fallen by around 10 percent, but with increasing numbers of buses in the market, we expect a significantly higher price drop.” By the end of the year, WSW will double its hydrogen bus fleet with ten more zero-emission vehicles from the Polish manufacturer Solaris. Technical availability has also reached the level of state-of-the-art diesel buses.

The hydrogen project “H2W” of WSW and AWG is supported by the EU funding programs JIVE, MEHRLIN and JIVE2, the federal funding program NIP2, and by the state of NRW with VRR funds.