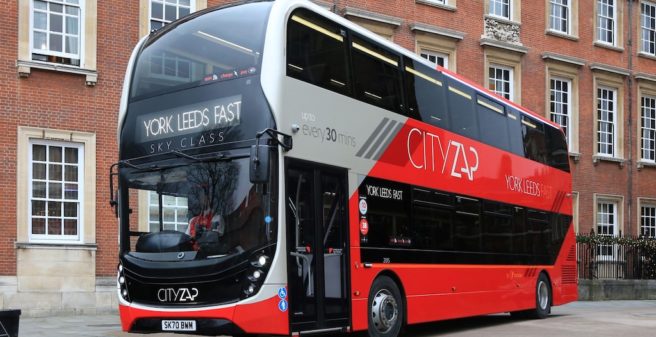 The UK bus and coach industry is rising with renewed vigour to the challenge of attracting customers back to public transport. As part of Transdev’s vision to ‘Build buses back better,’ the company is investing in some very high specification new double-deckers for key interurban routes such as the Cityzap express between Leeds and York. Ceased since early November, it returned re-invigorated on 13 December stocked with five of Transdev’s recently delivered ADL Enviro400 MMC ‘Sky Class’ vehicles.

The ‘Sky Class’ vehicles with Cummins ISB6.7E Euro6 engines are based on the Enviro400 MMC’s longest 11.5m option to maximise customer space at each of the 67 Kiel coach seats. On the upper deck, a number of seats are provided with tables including several single seats that have armrests and a side table arrangement specifically developed for them by Transdev. Each seat has access to a seat back unit incorporating request stop button, reading light, USB power, inductive charging dock and a coat hook. A single wheelchair space is provided behind the nearside front wheelarch with the space above utilised to install a twin stream waste bin allowing customers to separate recyclable materials and a shelf for Cityzap’s book club.

Transdev has also introduced a further 14 similarly equipped ‘Sky Class’ vehicles to build back better the Witchway branded express routes linking Burnley and Rawtenstall with Manchester. Measures to cope with the Covid-19 challenge are deployed on the vehicles which currently have a limited seating capacity of 40.