Zwickau: New train control technology on the joint track with the tramway – more regional trains to the city centre 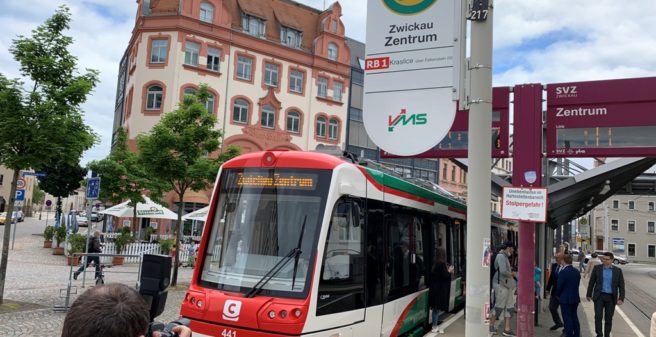 Since 13 June 2021, Zwickau once again sees more regional rail services serving directly the city centre. The three-rail track for joint use by the municipal tramway (SVZ) and the regional trains of the Vogtlandbahn had been upgraded and refurbished step by step since January 2021. SVZ and VMS (Verkehrsverbund Mittelsachsen) jointly financed the work.

The three-rail track is the core of the Zwickau model: it enables direct connections from Bavaria or the Czech Republic via the Vogtland to the centre of Zwickau without changing trains. The Vogtlandbahn has already been operating the routes with the RB1 to Kraslice (Czech Republic) and the RB2 to Hof (Bavaria) and Cheb (Czech Republic) for more than 20 years.

The control technology for the three-rail track between “Glück-Auf-Center” and Zentrum has been modernised and equipped with new control technology in recent months. This special track and the control technology are necessary because the Zwickau tram, which also uses the track, has narrow gauge of 1000 mm compared to the Vogtlandbahn which operates standard gauge of 1435 mm. Since 13 June 2021, regional train lines RB 1 and RB 2 are again serving Zwickau’s city centre all day.

VMS Managing Director Dr. Harald Neuhaus: “The VMS has contributed to the financing by providing around 75,000 EUR in funding. As the responsible body for local rail passenger transport, it gives me great pleasure to be able to order more transport directly to the centre of Zwickau again. After all, it is the core of a passenger-friendly transport model – similar to the well-known „Chemnitz model“, which also connects a city centre with the surrounding area without changing trains.”

An overview map can be found at:
http://www.urbanrail.net/eu/de/z/zwickau.htm