Retrofitting instead of new-built: conversion from diesel to electric buses 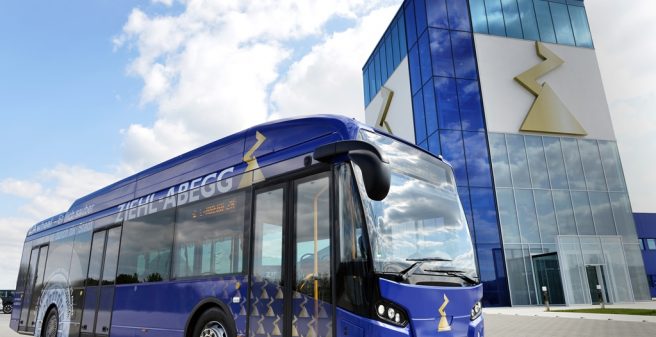 Ziehl-Abegg supplies electric portal axles with wheel hub motors, which make it very easy to convert from diesel to electric operation. I © Ziehl-Abegg

Since this year’s “Busworld” fair in Brussels, a new trend has now picked up speed in the bus industry. Several companies have specialized in the conversion of diesel buses to electric drive. The conversion is not only sustainable, but also significantly better in terms of investment and operational cost than the procurement of new electric buses according to the suppliers. We had a look at the companies in order to give an overview of the growing market.

e-troFit is a subsidiary of the Garching-based development company in-tech. For many years, in-tech has been doing development activities for leading automobile manufacturers. Since 2016, an in-tech innovation team has been working e-mobility.

At the end of 2017, in-tech, headed by Andreas Hager, launched the pilot project “e-troFit”. A team of specialists from all areas of vehicle development engineered a conversion solution for city buses. The idea was successful the decision was taken to develop a serial solution.

In order to launch these activities, in-tech founded its subsidiary company e-troFit GmbH in 2019. The Ingolstadt-based company is now responsible for the development, series production and distribution of the e-troFit solution.

Technically, the conversion from diesel to electric buses is quite a challenge. One advantage is that the ZF axles installed on many diesel city buses can be replaced by a ZF AxTrax AVE electric portal axle. The electric axes are driven by liquid-cooled asynchronous motors with a power of 125 kW each.

The traction batteries with a capacity of 240 kWh are installed in the rear and replace the diesel engine. The battery range is of 200 to 250 km. In the future, the battery capacity is to be increased to 300 kWh. Recharging can take place by plug-in or pantograph.

The vehicle control is a bit more complex. Since e-trofit does not have access to the protocol of the existing econtrol software, e-trofit had to do so-called reverse engineering. The developers analyzed more than 1,000 signals and integrated them into the new on-board computer to ensure that all functions still work the same.

e-trofit has already converted a Mercedes Benz Citaro to an electric bus and expects first orders. According to the manufacturer, the conversion is much cheaper than the procurement of new vehicles. Depending on the condition of the vehicle and the extent of the work, the conversion can cost between 300,000 and 350,000 Euro per bus. This is about half of new electric buses.

Under the leadership of the company “I see electric busses”, a consortium of six companies is converting a diesel bus into a fully electric bus within a working week. An upgraded MAN bus was demonstrated at Busworld in Brussels in October.

“For bus operators, replacing the upholstery in public service buses is almost an everyday task” says Pfeffer, explaining how the interiors of used public service buses are maintained in such good condition. Pfeffer is one of the founders of “I See electric busses”. Pfeffer, who studied internal combustion engines as part of his degree course, gives these old buses a new lease of life. “It’s now almost impossible to sell old buses to Eastern Europe because the cities there are also opting for clean vehicles,” he explains. “Virtually the only option is to sell them at a significant discount.”

The experts at “I see electric busses” spent 12 weeks dismantling and analyzing a MAN bus and then drove it back out of the workshop as an all-electric bus. “Once the engine and powertrain are removed, the interplay between the electronics in the vehicle has to be reorganized,” says Pfeffer. “I see” has already converted electric transport vehicles in the 3.0t and 3.5t (4.25t) range and is now entering the retrofit business for public service buses. To date, the sister company “I see electric trucks” has already retrofitted 400 electrified vehicles. Diesel engine, transmission and light engine are removed and replaced by an electric drive train. This consists of a Webasto traction battery including thermal and battery management with a lifetime of 10 years, the ZAwheel wheel hub motor from Ziehl-Abegg as well as an auxiliary system from MOTEG and a computer unit (VCU) from TTTech.

The company GreenTEC Campus GmbH is responsible coordination of the partners and also does the technical conversion. In addition, GreenTEC is testing the “freshly converted” electric vehicles in the non-public road network and carrying out the necessary TÜV approval.

The first converted electric bus is currently under TÜV approval and will soon be operational again. The bus is a 12 m long MAN Lions, operated by Autokraft / DB Regio. The state of Schleswig-Holstein has financially supported the conversion of the first MAN bus. The energy consumption per kilometer will be well below 1 kWh. Further conversions are planned. Numerous cities from all over the world, including Vienna, Hong Kong and Bangkok, have a concrete interest in the conversion of diesel buses to electric drives.

Tassima, a Berlin / Brandenburg – based company, has chosen a different approach. Tassima has initially specialized in the conversion of older sightseeing double-decker buses with the ability to convert later also conventional city buses.

Tassima was founded by Roland Pejawa and Dirk Poguntke. Pejawa has been active in the field of city tours since the 1990s and founded Gulliver’s Travels, of which he was managing director until 2006. Poguntke is the managing partner of Berlin City Tour (BCT). BCT operates 52 diesel buses of the types SD 200 and SD 202 in Berlin and had already converted three diesel buses from the 1980s to electric bus operation in 2016 with subsidies from the Berlin Senate.

Tassima also works with Ziehl-Abegg as a supplier of portal axles with wheel hub motors. Last year, Tassima was particularly present in the Berlin local press: Tassima and the partners IAV and Ziehl-Abegg have taken the goal to convert the older double-decker sightseeing buses in Berlin to electric drive.

Tassima says that its retrofit will enable the buses to have a minimum battery range of about 160 kilometers. This capacity, connected to a charging infrastructure, provides sufficient security reserves e.g. for the operation of sightseeing buses.

The drive system is supplied by the partners IAV and Ziehl-Abegg. IAV is responsible for system integration and engineering. The electric drive axles is delivered as Plug & Play conversion kits from Ziehl-Abegg. The main advantage for sightseeing buses is the reduction of operating and energy costs compared to diesel buses. In the case of sightseeing double-decker buses, the operating costs per kilometer can be roughly halved. Since the average service life of city tour buses is about twice to three times that of conventional city buses, the need for replacement of the diesel engine with emission-free electric drives is particularly important in this segment. In addition, Tassima sees the noise reduction, the higher ride comfort and the image gain for city and operation as further advantages.

Tassima also offers various options for the financing of the conversion. One scenario is that Tassima buys the old diesel bus to the residual value and then converts it to e-drive in order to return it as a leased or rented vehicle to the operator. For the lease, rental, and financing model, Tassima works with the Nürnberger Leasing Group and the GLS Bank.

The future looks very bright for Tassima. The plant under construction in Ragow, south of Schönefeld in Brandenburg, will be able to carry out up to 150 retrofits per year.

I want to open the same facility in India( Delhi,Bangalore,Mumbai,Chennai).

Could you suggest how to proceed. We can colabroate with your team.

Inquire about
Electric Conversion on a Coach
United Kingdom

Electric Conversion with a
Coach

Maharashtra State Road Transport Corporation is having fleet of 9000 buses of BS III engine and we are doing study for conversion of these diesel buses into electric. How you will help us to convert our fleet.