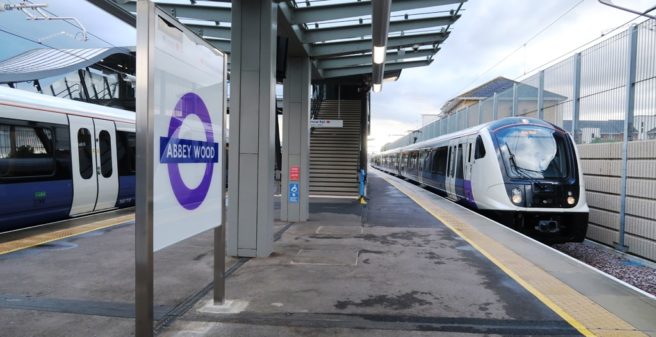 24 May 2022 saw the start of revenue service on the new East-West cross-town rail service baptised “Elizabeth line”. Trains operate between Paddington and Abbey Wood serving nine new stops on its 23.5 km long way – more than three years later than planned. 21.5 km of the new line are underground in tunnel sections. A tenth new station is to be opened at Bond Street at a later stage.

The new section is the main part of a project which was initially labelled Crossrail and has been under study for several decades. Early ideas for such a rail link had already been discussed at the end of the 19th century. The project got more concrete in 2001 when Transport for London TfL and the Department for Transport created Crossrail Ltd., although official start of construction did not occur before 2009, with tunnel works beginning in 2012.

The eastern branch between Liverpool Street and Shenfield was the first section to be opened by TfL Rail on 31 May 2015. The Western section between Paddington and Heathrow started operation as TfL Rail in 2018, to be followed by the service between Paddington and Reading in 2019. The new strech from Paddington via Liverpool Street to Abbey Wood now open to public provides the missing link between these section, although through-operation has not been introduced yet. Passenger to Reading and Heathrow have to change trains at Paddington while the ones travelling to Shenfield have to change at Liverpool Street.

Each of the new stations in the central section is designed differently, however, certain design components such as seating, signage and full-height platform screen doors are common on all stations. 31 of the 41 stations along the Elizabeth line route are on the surface rail network to the east and west. The total length of the Elizabeth line network is 118 km, electrified with 25 kV 50 Hz AC catenary. Upgrades to existing stations on the suburban parts of the lines included platform lengthening, improved customer information screens, signage, new ticket machines and CCTV.

Siemens Mobility delivered the central section signalling and the communication and control systems for the new line on behalf of Crossrail Ltd. The CBTC signalling and control system will enable high-frequency and automated train operation for the central section of the Elizabeth line. The technology was designed, manufactured, installed, tested and commissioned at Siemens Mobility facilities in both the United Kingdom and Germany.

The operator MTR plans its trains and crew with the integrated resource planning solution IVU.rail from IVU Traffic Technologies.

Elizabeth line operates 70 Alstom Class 345 Aventra train sets. The first unit started revenue service in June 2017. The 7- and 9-car trains have been designed and built at Alstom’s Derby factory (previously Bombardier) and are maintained by Alstom at Old Oak Common depot in West London under maintenance contract for the next 32 years. The trains are 205 metres long and offer a capacity of up to 1,500 passengers.

In February 2016 HM the Queen unveiled the new roundel for the Elizabeth line – the new service was rebranded as Elizabeth line including the sections between Reading and Heathrow to Paddington and Shenfield to Liverpool Street, previously operating as TfL Rail.

Service on the central section is provided every 5 minutes from Monday to Saturday, while operation on Sundays is expected to be introduced later this year. Approximately 200 million passengers are expected to use the lines annually in the short to medium run. The Elizabeth line is operated by Hong Kong-based MTR Corporation as a concession of Transport for London.

With a total investment of approximately 19 bn GBP Crossrail Elizabeth line is definitely among the largest infrastructure projects in Europe.