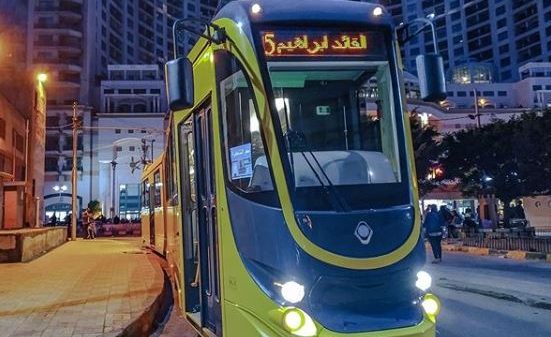 One of the first Tatra-Yug trams in service on the new lines 5/6 on the Ramleh fast tram at the terminus San Stefano I Photo: Karim Khalid

Opened in 1863, electrified in 1902 and very popular with locals, the tram of the Egyptian city of Alexandria is in desolate conditions due to lack of maintenance. The tram is transporting some 80,000 passengers per day. The rolling stock consists in 280 used Düwag, Kinki Sharyo and Ganz and Tatra trams of which 119 units remain in daily service on the “bumpy”, 32 km long track network which consists in the city centre “Al-Medina” tram with 16 lines and the so-called “Ramleh” tram network which is running in parallel to the Mediterranean coastline.

Alexandria purchased 99 used Düwag-built trams from the tram system in Copenhagen which closed in 1972. For decades, the Düwag trams were only operated on the city lines. A few years ago, some of the Düwag GT6 trams have been modernised and re-painted (in red and blue white) and are now in service on lines 5/6 on the Ramleh tram. The Ramleh tram is mainly operated by Kinki Sharyo multiple units including double-deck trams – a specialty which is only found elsewhere only in Hong Kong and Blackpool. In 2015, a dealer purchased second hand Tatra KT4Dm and T6A2m from Berlin and Potsdam which were shipped to Egypt, but never entered operation in Alexandria.

The new Tatra-Yug vehicles are 2.2 m wide unidirectional articulated trams in traditional steel construction with about 30 seats and a total capacity for around 220 passengers. They are air-conditioned and, according to press reports for the extremely hot climate in Alexandria, they are equipped with a kind of emergency air conditioning. In addition, if both systems fail, the windows can be opened. The catenary of the city network requires a trolley. This is why both a pantograph and a trolley have been installed. It is specifically pointed out that steel-wheels with rubber damping are used, probably to counteract derailment. The vehicle is said to be equipped with Wifi, GPS and an audia system. The first vehicle was delivered on 10 February 2019 and should have started commercial operation after a few days of tests. The remaining vehicles will be delivered later this year.

The vehicles are manufactured at the Tatra-Yug factory in Dnipro. Tatra-Yug has started in 1993 and at that time it took over the technology of the former largest tram manufacturer in the world, the Czechoslovak factory ČKD Tatra. Since then they have built various trams for Ukrainian cities, including partial low-floor trams. The company claims to be able to manufacture 100 % low-floor vehicles as well. Tatra-Yug employs about 300 people and the manufacturing process is similar to that of western manufacturers in the late 20th century.

The French ambassador to Egypt revealed in mid-July 2019 that France is preparing the provision of € 100 million for the modernisation of Alexandria’s tram network through the Agence française de développement (AFD). The General Manager of Vinci SA will visit Egypt in the coming months to speed up discussions with the administration. France has made a significant contribution to the development of rail transport in Egypt, including the financing of the construction of three metro lines in Cairo, which were completed between 1979 and 2012, with more than € 1 billion.

A map of Alexandria’s tram system can be found here:

[…] Alexandria Tramway Network was launched in 1863 and is the oldest and largest street railway system in Africa. Although […]