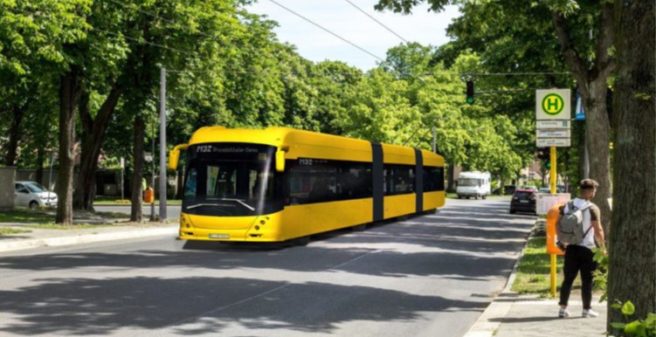 As in many other cities around the world, trolleybuses have been outdated since decades – the last traditional trolleybuses ran in West Berlin in 1965 and in the eastern part of the city in 1973.

But now a comeback is looming: As Berlin’s public transport operator BVG is preparing to electrify its bus fleet until 2030, the partial installation of trolleybus overhead lines is planned for the trunk lines of the network in Spandau. Under the slogan “as much as necessary and as much as possible”, the partial electrification with catenary represents the economical optimum between re-charging infrastructure and batteries. The plan is that battery-hybrid-trolleybuses will run under catenary 50 – 65 % of the respective routes in order to re-charge the traction batteries. The rest of the line will be operated in battery mode. This principle is also called “In Motion Charging” (IMC) in other cities. Apart from economical benefits, the catenary allows to charge while driving and therefore has no impact on timetable or the fleet size due to long recharging times at the terminus. The combination of catenary and batteries also allow for higher ranges and larger bus units such as bi-articulated buses.

The plan is to convert the trunk bus lines in the Spandau district. Until 1952 there used to be even a 5 km trolleybus line (A31 Spandau – Staaken). The hybrid-trolleybus system is the result of a feasibility study commissioned by the BVG. The results of the study have now been presented in detail during the VDV Electric Bus Conference in February 2020 in Berlin. Part of the study was a system comparison with other electric bus operation and charging concepts in various implementation variants in the current network. All scenarios were compared in terms of technical and operational aspects, financing and funding opportunities, cost-effectiveness, costs and sustainability.

Three different scenarios have been compared which each other: A Trolleybus network in Spandau with 84% of electrified route kilometers B Optimized scenerio with with 61% electrification C Reduced scenario of with 54% electrification

The scenario B was selected:

In a first step, the conversion of lines M32, M49, X49 and X34 is proposed. The feasibility study recommends to start with line M32 as a pilot line, because it is expected that passenger number will increase when combining this line with different new branches. In terms of passenger numbers, the line is suited for the use of bi-articulated trolleybuses and the line runs close to the depot and is not affected by the conversion plans for tram operation in the long term.

In summary, the system will have the following features:

Further detailed studies and investigations are ongoing. In addition, BVG already has various battery electric buses from different manufacturers in commercial service and will continue to provide additional vehicles (17 articulated buses) in service 2020. We will report on the further developments here.

I somehow miss the system comparison of a new trolleybus network with extensions of the tram, metro or suburban rail network here.

The same idiocy that should be thrown out now. Trams should of course be used.
Dr Neil Clifton