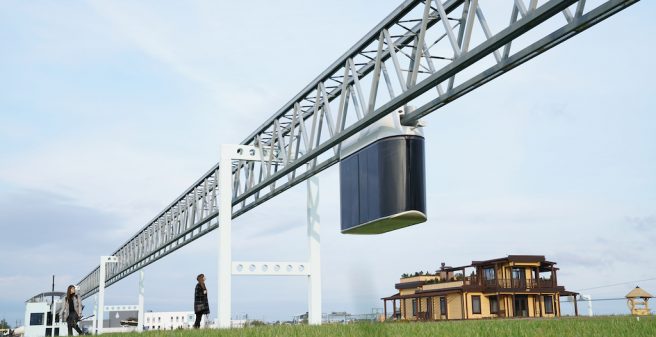 SkyWay is an innovative elevated railway - a first memorandum of understanding has been signes earlier this year with Dubai I Quelle: SkyWay Systems

With more than 3 million inhabitants, Dubai is the largest metropolis of the United Arab Emirates (UAE). Its‘ public transport mix already consists in a light rail and bus system, a metro and a monorail. There is a chance that Dubai will have a fifth transportation system in the future.

The Dubai Media Office announced on 30 April 2019 the signing of a Memorandum of Understanding with Skyway Greentech on a 15-kilometer SkyWay urban transport system with 21 stations along the skyscrapers between DIFC and MyTownDubai.

But what is behind this concept? SkyWay is a mechanically guided suspension railway, which could perhaps be compared with the Wuppertal suspension railway – but of course with the usage of of state-of-the-art technologies. The developer and manufacturer of the system is the SkyWay group of Russian inventor Anatoly Yunitskiy. For Dubai, transport units with a capacity for a maximum of ten passengers are to be used which should enable a transport capacity of 8400 persons per hour and direction. The driveway consists of two upright rails, which are fitted with pre-stressed steel cables and filled with concrete. The carriages roll on those rails – additional lateral wheels provide the guidance.

This technology seems to be quite mature in terms of its mechanics. A crowdfunded 50 million USD (ca. 44 million EUR) development program with over 100,000 investors under the direction of inventor Anatoli Yunitskiy is developing a wide range of other revolutionary transportation systems. Since 2015, SkyWay Technologies Co. has been operating a production facility with a 36-hectare EcoTechnoPark test site near Maryina Gorka in Belarus. The various transport systems should cover the needs of passenger transport in city, commuter and interurban traffic at speeds of up to 600 km/h. SkyWay claims that its small transport units with a capacity of 1 to 168 people can travel safely at intervals of only 2 seconds, thus providing a transport capacity of up to 50,000 passengers per hour. Freight versions have also been developed. There are different types of vehicles for different applications. Rails and wheels are made of steel and safe against derailments. SkyWay demonstrates the feasibility of its system through a variety of technical studies and a model wind tunnel test at 500 km/h and operating tests with prototypes in original size. At the same time, the investment and operating costs should be well below those of other innovative and traditional solutions such as Hyperloop or conventional railways.

With regards to the practical implementation of the SkyWay system for Dubai, however, there are a few more questions to be raised. It has been communicated that the interval between vehicles will be of 2 seconds with a mean estimated stop times of at least 10 seconds. This would mean stations with long platforms. On the other hand, if larger vehicles are used, such as the three-car SkyWay Unibus for 18 passengers as it was shown at the InnoTrans 2018, a slightly longer dwell time of about 20 seconds would be required. The impact would be that a frequency of only two vehicles per minute are possible. This would result in a transport capacity of around 2000 people per hour per direction – which is far from the targeted 8400 people.

The documents supplied so far show that there are no platform screen doors between the vehicle and the station platforms – in comparison to the light rail system supplied by Alstom where all stops are air-conditioned and therefore equipped with platform screen doors. Without adequate protection, passenger would exit from the air-conditioned SkyWay vehicles directly into the desert heat. For sure, the system will certainly need a lot of further development and adaptation work for its’ application in Dubai. According to reports, the corporate group is also planning another test site in the Arab world.

In addition to the technical uncertainties, information about the fundraising concept and the long-term financing of the technology is limited and contradictory – equally scarce remains financial and economic data about the company itself.