Anniversary of U5 line to Berlin Hönow – historical train in service 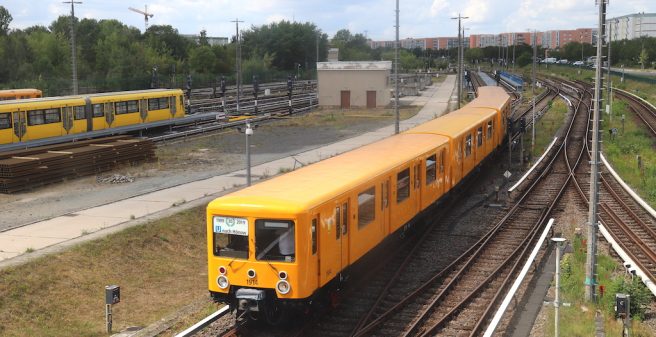 30 years ago, the then (East) Berlin U5 was extended from Elsterwerdaer Platz to Hönow. Opened on 1 July 1989, the ca. 5 km long route extension was inaugurated. On the occasion of the anniversary, the BVG and the AG U-Bahn carried out special trips with a train of the EIII type on the line on 21 July 2019.

The EIII cars were used in GDR times on the former line “E” – as it used to be called. The last service took place on 16 July 1994. On the rides on 21 July 2019, passengers were able to experience a ride on the historical train for free.

A short history of line U5

Planning for the fifth Berlin metro line was already planned at the beginning of the 20th century. It was originally planned as a small profile line as the lines U1 to U4 have a smaller tunnel profile than the lines U5 to U9. Due to the outbreak of the First World War, the plans were interrupted and it was not until the 1920s until construction work started. The construction work finally began in May 1927 for the seven-kilometer route from Alexanderplatz to Friedrichsfelde. The opening of the line took place on 21 December 1930.

On 25 June 25 1973, the route was extended from Friedrichsfelde to Tierpark. In the 1970s, planning began for a new residential area around the district Hellersdorf in the east of Berlin. Due to the congestion of the central commuter line (S-Bahn), the implementation of an additional S-Bahn line was out of question. This is why the extension to Hönow and Hellersdorf was implemented as an extension of the existing metro line E. It was decided to convert the route via the no longer used railway line of the VnK (connection to Kaulsdorf) as an overground metro line. The 10.1 km route was finally planned in 1983/84. Construction began in March 1985 and was scheduled in two phases. The first construction phase from Tierpark to Elsterwerdaer Platz was opened on 1 July 1988. This includes the Wuhletal station, where the subway and S-Bahn stop at the same platform. On 30 June 989, the expansion to Hönow, which now celebrated her “30 Year Old”, was opened.

Extension and the Chancellor’s metro

Originally, the extension of the U5 from Alexanderplatz via the Brandenburg Gate to Hauptbahnhof was opened in 2006. Due to water ingress at Brandenburger Tor station, the U55 commuter line between Brandenburger Tor and Hauptbahnhof was opened in 2009. As a result, the 1.8 km metro line U55 became known as the “Chancellor metro” because it operates directly under the Chancellery. The opening of the 525 million euro as an extension of line U5 to Hauptbahnhof is planned for the end of 2020.

Operation and rolling stock – in the past and present

In the early years of the line E vehicle types CII and CIII, built from 1930 on, were used. After the Second World War, part of the vehicle fleet was confiscated by the Soviets and was used until 1966 in the Moscow metro. As a consequence, small profile trains with so-called mounted profiles, “flower boards” were used. The VEB Waggonbau Ammendorf built in 1958 two prototypes of the train type EI, but as a heavy steel train with high energy consumption it was not accepted. Further plans for an EII were also abandoned in the 1960s.

Eventually, the GDR Ministry of Transport decided to convert unused S-Bahn rolling stock into metros. The need for S-Bahn trains was low due to the Western S-Bahn boycott. Conversion work of the series ET 168 (which was originally built in 1926) started in 1962 and was carried out in the maintenance works Raw Schöneweide. Later, series ET 165 (years of construction 1928 – 1931) and ET 169 (year of construction 1925) followed. The trains also received a new carbody. After the German reunification in 1989, it was no longer economically viable to maintain the old EIII rolling stock. The trains were put out of service and subsequently replaced by the modern AEG / Siemens (later Bombardier / Siemens) H series.

The four-car train consist 1914/1915 + 1916/1917 is currently the only operational unit. It was restored in its last operating condition and put back into operation in 2017 on the occasion of the Federal Garden Show. The four cars are used on different occasions on special trips of the U5.

Stadler trains to reinforce the service on line U5

Again, Berlin’s metro is experiencing a shortage of trains. Between July and December 2017, Stadler Pankow delivered a total of 11 four-car trains of the IK17 series to the BVG which were meant to be operated on small-profile line U2. These trains are now used for reinforcement on the line U5. To compensate for the width of the vehicle, a 17.5 cm wide gap bridging between the platform and the vehicle was added – so-called “flower boards” which reminds of the solution used in the post-war area. To compensate for the different platform heights in the large and small profile network, the car bodies were raised by cushions on the bogies by about 75 mm. The vehicle couplings received coupling adapter for height compensation. The deployment is planned as a temporary measure until the new vehicles of the so-called BVG 2020 fleet procurement are available in the beginning of the 2020’s.