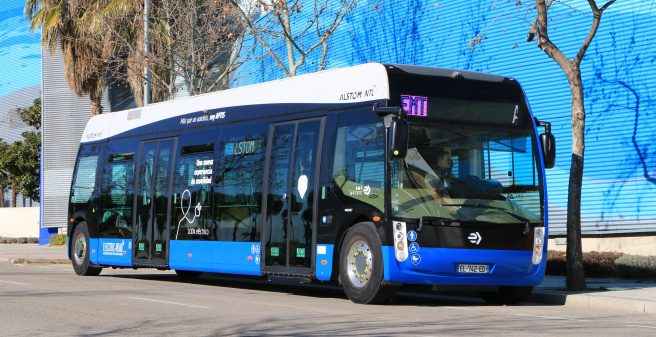 Alstom, so far known as an OEM for rail vehicles and equipment, is entering the e-bus market. Alstom’s new product, the APTIS, is a very innovative vehicle. Let’s have a look at the technology and the first order for Strasbourg.

So far, all low-floor buses follow the scheme of traditional high-floor buses whose wheels are in the middle of the passenger compartment. This architecture type is rather unfavorable for low-floor buses due to the distribution of seats and doors with steps and space loss. Alstom found a solution with the low-floor APTIS e-bus. Similar to the”stepless” New York tram from 1912, the wheels are located at the extreme end the vehicle. The driver sits between the front wheels and at the back there are a few seats which are accessible via three steps.The entirely stepless low-floor area measures 10.4 m. Up to three wide doors and a flexible layout of the interior with excellent seat distribution and easily accessible wheelchair seats can be installed. The two prototypes already ran over 40,000 km under real operating conditions in differentEuropean cities, including Berlin and Hamburg. The thirdprototype was presented at InnoTrans 2018 on the Bus Display.

Both the front and rear wheels are steered, giving the bus a perfect gap-free docking of all doors at the stations. Furthermore, this allows for exccellent maneuverability with up to 25% less space usage in curves in dense city traffic. The bus also allows for uniform load distribution of approximately 50% on each pair of wheels. Thanks to this, APTIS uses standard truck wheels in comparison to standard buses using specific double wheel sets.

The vehicle is battery operated and the re-charge takes place at night in the depot. According to the manufacturer, it has a range of 200 km and possibilities for recharging at the end stops can also be provided. Only the rear wheels of the bus are powered and even a trolleybus version is planned. In the latter, the battery weight, representing ca. 10 % of the vehicle mass, would then be eliminated. Alstom claims that thanks to the integral body structure, which has been taken over from its’ tram design, APTIS is not heavier than a standard bus. The procurement price should comparable to other e-buses but the advantage of a significantly longer lifetime – Alstom mentions 20 years. It is expected that the Life Cycle Costs are very more. At a later point in time, an articulated version of the APTIS is also planned.

Alstom received a first order in March this year. The public transport operator CTS in Strasbourg ordered 12 APTIS e-buses. The production will take place in the Alsatian factory in Hangenbieten. The APTIS also won the 2017 Innovation Award at the international bus fair Busworld. In JanuaryIn 2019 APTIS received the official label “Origine France Garantie” which confirms that more than 60% of the added value is made in France. Since September 2018, France ‘s Central Procurement Agency for public transport (CATP) is referring local transport authorities to the APTIS which allows members to order the e-bus directly without long and expensive processes.