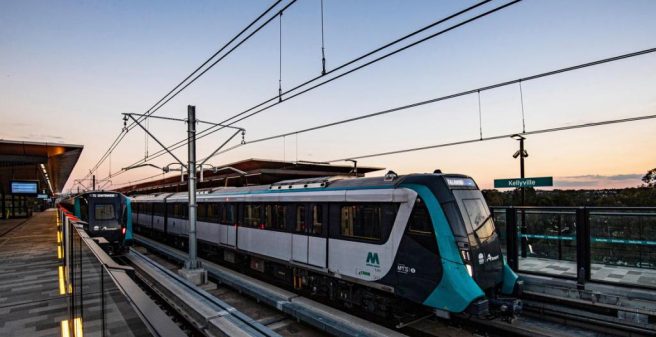 The 36 km North-West metro in Sydney began operation on 26 May 2019. It is the first section of a fully automatic, driverless operated high-speed railway, which runs for about 28 km in the tunnel and thereby uses parts of the existing commuter rail connection in the Greater Sydney area. It hat 13 stops and runs from Tallawong to Chatswood and is connected to the Sydney commuter rail there. Transfer possibility exists also in Epping. Trains will run every four minutes in the peak in each direction. The Sydney metro is being operated by MTR from Hong Kong. The Metro line is currently being extended from Chatswood to Bankstown via the City and by 2024 Sydney will have 31 metro stations and a 66 kilometre standalone metro railway in addition to its extensive suburban rail network.

The Metropolis trains have been designed uniquely for Sydney by Alstom in France and assembled at its centre of excellence in Sri City India, with contributions from Alstom’s operations in Australia, Brazil, China and Belgium. The trains include 3 double-doors per car for improved access and passenger flows, large windows and ambient LED lighting.

The system, equipped with Alstom’s world computer based train control system, Urbalis 400, minimises the time stopping at stations and the times between each service – ensuring a comfortable and reliable journey for all passengers. Furthermore, all stops are equipped with platform screen doors.

In Sydney, there is currently a number of other railway expansion projects ongoing, including a massive expansion of the low-floor tram which has so far only consisted of a single line.

Further information and a map can be found here: https://www.sydneymetro.info/