Bielefeld: Survivor in the Historical Museum 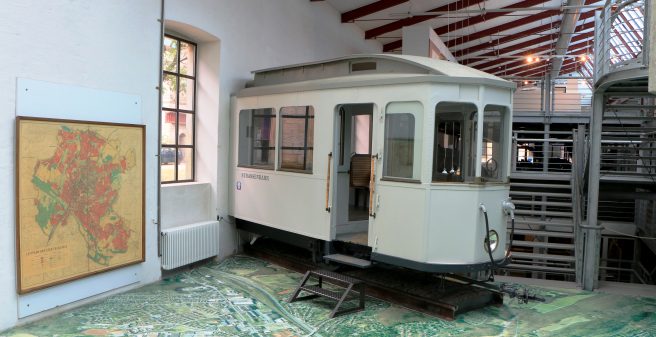 A remarkable survivor of the former tramway fleet in Bielefeld can be found in the Historical Museum of the city:

A part of the former four-wheel tram no. 117 (since 1957: no. 19) is exibited here in a building of the former Ravensberger Spinnerei (Spinning company), where the Historische Museum is located. The tram can be visited during opening hours. Historical film scenes are also shown in the car.

The tramcar was built by Waggonfabrik Uerdingen/AEG in 1926. It served as workscar for winter duties since the 1960s and carried the number892. Around the year 1977, it was sold to the Deutsche Strassenbahn-Museum in Sehnde-Wehmingen near Hannover, and when the new owners of the museum decided to dispose off various vehicles, no. 892 was sold to the newly founded museum in its home town. The remaining body was externally refurbished and will hopefully survive here for many more decades.