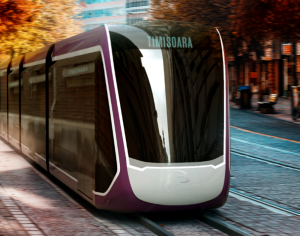 Design of the new Bozankaya tram for Timișoara - 16 vehicles will be delivered as a first batch I Photo: Bozankaya

Timișoara’s tram has been operated with second-hand trams from Bremen and Munich for years – of which some are already in operation since more than 50 years. From 2021 on, the city will also have a fleet of modern low-floor trams which have just been ordered with the Turkish manufacturer Bozankaya.

Last week, Bozankaya announced the awarding of a contract to supply 16 trams of a total value of 33 million EUR. The contract includes an option to provide an additional 24 trams, bringing the entire contract value to more than 80 million EUR. The first deliveries are expected 18 months after signing the contract, with an entire project duration of 48 months.

The second tram contract for Bozankaya

Under this contract, Bozankaya will produce 100% low-floor trams with five modules and a total length of 30m. The vehicles have a maximum speed of 70 km/h and a combined seating and standing capacity for 170 passengers. The electrical and traction equipment will be supplied by Medcom, a Polish system supplier. The trams will be fitted with traction battery in order to allow catenary-free operation for up to 60 km, offering more flexibility in case of repairs or other disruptions to the electric network. This also allows
Timișoara which will be European Capital of Culture in 2021, to extend tram lines without having to construct additional catenary lines – an attractive option for historical city centres. If such extensions are planned, is currently not known. Timișoara’s public transport company STPT (Societatea de Transport Public Timișoara S.A.) operates a tram network has a length of 30.9 km which is operated by seven lines.

The tram order for Timisoara is Bozankaya’s second tram order. The Germany- and Turkey-based company delivered 30 five-car low-floor trams to the Turkish city of Kayseri under a 42 million EUR contract. Until then, the company had only being producing buses, including electric and trolleybuses. For instance, Bozankaya is producing the Sileo electric bus which is also in operation in several cities in Germany. Bozankaya was founded in 1989 in Germany as an R&D company and expanded to Turkey in 2003 and has production sites both in Ankara, Turkey and Salzgitter, Germany.