Braunschweig: Restart for the electric bus 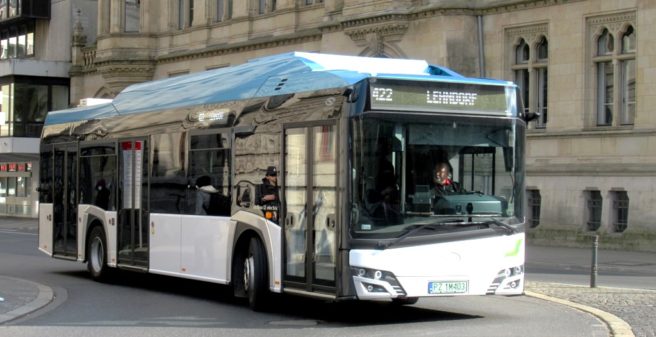 The special feature of Braunschweig’s e-buses was the way how they were recharged. Braunschweig did not rely on charging them only overnight at the depot. No, recharging on the line was considered necessary. But they decided for the unusual inductive „Primove“ system, which has only been used in three companies in Germany to date: in Berlin (five Solaris Urbino 12 electric), Mannheim (two Swiss Hess) and in Braunschweig. These three companies used Bombardier‘s „Primove” system: the bus stops on a dedicated charging plate embedded in the roadway and is charged inductively from below.

Berlin and Mannheim said goodbye to this type of recharging relatively soon, only Braunschweig still uses it today. The project manager at BSVG has confirmed to the author several times that it does work well.

And yet it became quiet about Brunswick’s electric buses. This can be taken as a good sign: nothing negative to report…

At the beginning of this year, the activities around Brunswick’s electric buses restarted. An electric articulated bus of the type “Lion’s City 18 E” from MAN (“M-AN 955 E”) came as a demonstration vehicle, operating as pure “depot charger“ overnight.

Since 4 March 2022, a second e-bus for depot only charging has been on test at Braunschweig’s BSVG. It is a Solaris Urbino 12 electric. It is used on lines 422 and 426, and BSVG has defined for each day of the week on which of the two lines the bus should run. So on Saturdays, Sundays, Mondays and Wednesdays it is the 422’s turn, while the electric Solaris runs on line 426 on Tuesdays, Thursdays and Fridays.

BSVG managing director Jörg Reinke: “For our company, this is another good opportunity to test the everyday suitability of the electric buses in the Braunschweig network and to gain experience.” After all, he mentioned, BSVG has applied for subsidies for electric buses and plans to get a city council resolution to convert all bus services in the city to electric operation.

The test Solaris is to be used between 12 and 16 hours a day and cover about 230 kilometres. Its battery capacity is a remarkable 528 kWh. During the test phase, BSVG wants to deliberately push the e-bus to its limits to see what it is able to do. For the assessment, “not only the technical findings play a role, but also the experiences of our drivers. From this,” says Reinke, “we can learn a lot for the future.”

And another electric test bus is due to arrive in Braunschweig this month: this time a Mercedes-Benz eCitaro.