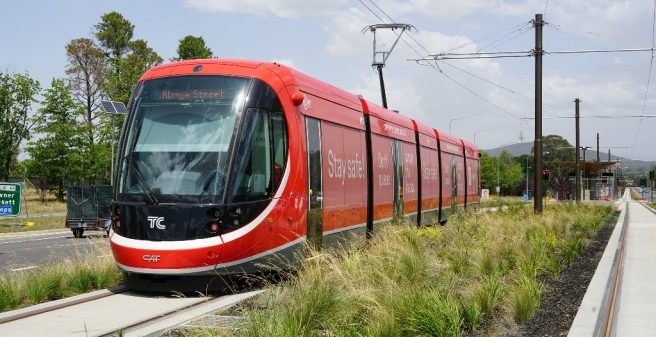 After less than three years of construction, the first stage of a new, modern tramway in the Australian capital of Canberra was formally opened on 20 April. Free rides were offerred to all passengers during the first two days of operation.

The frist 12 km connect Alinga Street in the city centre with Gungahlin Place in the north. A total of 13 stops will be served. During rush hours the new “Canberra Metro”, as the system has been baptised, runs every 6 minutes, and with a 10 to 15 minutes headway during the rest of the day. The system is operated by Canberra Metro Operations (CMET) with the support of Deutsche Bahn Engineering & Consulting for a period of 20 years. CMET consists of John Holland and Pacific Partnerships, infrastructure and construction companies. The latter are also part of the Canberra Metro Consortium, which implemented the AUD 707 million (approx. EUR 446 million) project as part of a Public Private Partnership (PPP) together with CPB Contractors, UGL, Mitsubishi Corp, Aberdeen Infrastructure Investments, DB Engineering & Consulting and Mitsubishi, CAF and Aberdeen Asset Management.

14 low-floor trams from the Spanish manufacturer CAF are. The 33-metre-long vehicles hold 276 passengers, 66 of them are seated. CAF is responsible for maintenance for a 20 years period.
Once the operating concession expires, the tram system will be transferred to the Australian Capital Territory. In addition to an extension of the line to the southern part of the city to Woden, the city of Canberra is planning another six tram corridors.