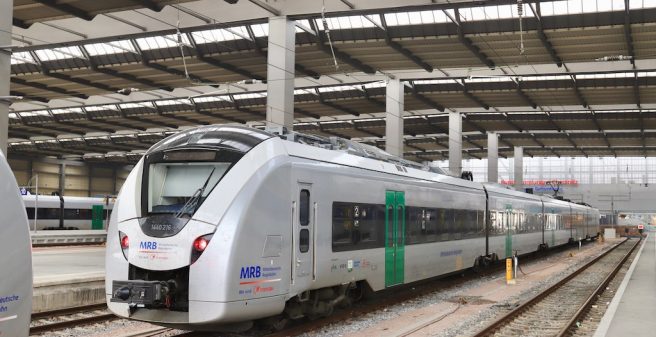 Already today, MRB and VMS operate a fleet of 29 three- and five-car Alstom Coradia Continental in Central Saxony - 11 further battery trains will join the fleet in 2023 I © UTM

The end of the GDR „Reichsbahn“ trains is close: commuters between Chemnitz and Leipzig will be traveling much more comfortable and faster from 2023 onwards. Innovative battery trains will be deployed on the so-called Regional Express line 6. Those will replace today’s locomotive-hauled diesel trains. On 27 September 2019, the Land Transport Authority of Central Saxony (VMS) announced that it would procure 11 new battery-powered Coradia Continental regional trains from Alstom Transport.

The trains are based on the existing Alstom Coradia Continental EMU platform which the VMS and the operator MRB, a subsidiary of Transdev, operate on the routes between Dresden and Hof today. The EMU’s will be fitted with roof-mounted high-power traction batteries for the non-electrified section of the line. Under the catenary, the vehicle operates like a classic electric multiple unit. The traction batteries will be recharged via the existing pantograph. On the RE6 this will happen in the electrified train stations Chemnitz and Leipzig during the turnaround time.

The route is nearly 70 km long and will thus be operated in battery-mode in the future. This is the third application of this type in Germany, after Schleswig-Holstein announced the order of 55 battery trains from Stadler and Baden-Württemberg planning to order 20 battery trains from Siemens Mobility. So far, Alstom dominated the German diesel market and has been marketing the iLint hydrogen train for several years. Since one year already, two prototypes are in operation in Lower Saxony and the company has already won two orders for hydrogen trains from Lower Saxony (14 trains) and Hesse (27 trains).

On the one hand, the investment into the new trains aims to improve the service quality of regional traffic and, on the other hand, to bridge the long waiting time until the planned electrification of the line. The completion of electrification is expected at the end of the 2020s and early 2030s at the earliest.

In 2023 however, the current transport contract for the route, which is currently operated by the Central German Regional Railways (MRB), ends.

Four sets of diesel-hauled passenger carriages with Siemens ER20 “Eurorunner”, built in 2005, are in usage today. The GDR-built passenger coaches date back to the 1980s and were used for many years as IR coaches (InterRegio) by Deutsche Bahn. Most recently, the cars were modernized by PFA Weiden GmbH. From the year 2023, the MRB network will be re-tendered so that the new Coradia Continental trains will be used on the RE6 with HVAC and low-floor entrances. For the procurement of the 11 trains, the VMS has taken out a loan of 50 million euros. According to local media reports, the actual investment amount is even higher.