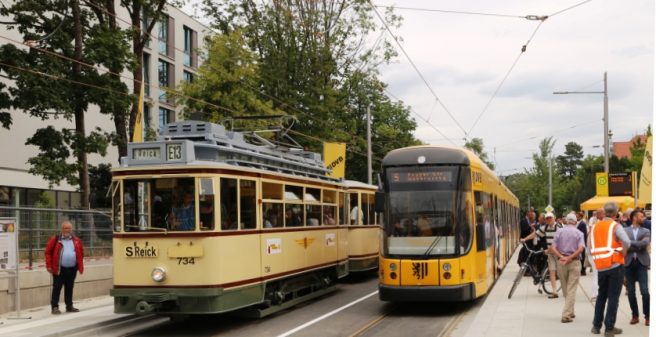 For the inauguration of the new tram track in Oskarstraße on 5 July 2019 historical trams (such as the MAN tram 734, built in 1913 with trailer car 1029) as well as the modern Bombardier low-floor trams were in operation I Foto: DVB AG

Dresden has a new light rail section. The new line connects Wasaplatz via Oskarstraße and Tiergartenstraße and is part of the planned new tram line to Löbtau. The first regular trams started operating on Saturday, July 6, 2019. Since then, tram lines 9 and 13 again are running between Prohlis and Mickten or Kaditz. At the same time the bus lines 61, 63, 75 and 85 returned to their standard route.

The new light rail line is part of the Dresden light rail program 2020. The aim is to close existing gaps in the tram network, to improve the connection of residential areas and the university campus as well as the various university and research locations. For this first section, the DVB (the Dresden transport operator) received funding totaling around 8 million euros, of which 5.2 million euros come from the Free State of Saxony.

With the new route new bike paths and a new transfer point to the S-Bahn have been installed. Previously, the tram ran through parallel roads without transfer to the S-Bahn. Around 30,000 passengers pass the Wasaplatz daily by train and bus. More than 3,000 of them changing between transport modes.

The new route of the lines 9 and 13 runs from Wasaplatz through the Oskarstraße to the station Strehlen and continues on Tiergartenstraße to the stop “Querallee”. Here, the new track connection connects to the previous trunk line in the direction of the zoo and Lennéplatz. The stops at the Wasaplatz, at the Strehlen S-Bahn station and on the outskirts of the city on the Querallee were installed as new barrier-free platforms.

Between Wasaplatz and Tiergartenstraße a total of around 1.1 km of double track and 116 meters of single track for the tram were installed. For the track bed, the so-called pre-casted concrete slab track was used. The rails are mounted with vibration-insulation on the slab track. This variant has proven to reduce noise and ensure a very long lifetime. While worn rails can be exchanged later with little effort, the concrete foundation remains stable for up to 60 years. Next year, the city of Dresden will also replace the old tracks on the Wasa and Franz Liszt streets while renewing lanes and sidewalks in this area.

Special trips during the inauguration

Already on Friday 5 July 2019, one day before the official commissioning, DVB offered free special rides on the new route. Several historical trams were in operation alongside the low-floor vehicles. The special cars operated every 15 minutes between the Reick railway station and the Wallschleife track and many passengers came to say “hello” to the new tram line.

The new tram track between Wasaplatz and Querallee is part of the “Dresden light rail program 2020” project. The now inaugurated extension is the first section of the new tram line between Löbtau and Strehlen which is to replace the overcrowded busline 61 between Löbtau and Strehlen. It is carrying 32,000 passengers per day and is one of the busiest bus lines in Dresden.

Construction of the new section started on 1 March 2017 with the section first on Oskarstraße. Due to a procedural error of the licensing authority of the Free State of Saxony, the Saxon Higher Administrative Court decided for the suspensive effect of a lawsuit. For the already started construction site this meant a more than 14-months construction freeze and additional costs. Construction work only resumed 6 July 2018. A year later, the new track was ready for operation. By September 2019, the remaining work at the tram stops and urban design at Wasaplatz will be completed. In autumn, the planned trees and shrubs will be planted. Originally DVB had planned costs of 16.7 million EUR for the construction project. Due to the interruption, both the construction process and construction period, the budget rose significantly. Currently, DVB estimates the cost to be at around 24 million EUR with almost 60 % funding from Federal Ministry of Transport and Digital Infrastructure and the Free State of Saxony. Additionally, there are the construction of the city Dresden, DREWAG and city drainage with around 5.8 million EUR. In the total cost will be just under 30 million EUR including 1.7 million EUR for the rehabilitation of Wasa and Franz Liszt streets.