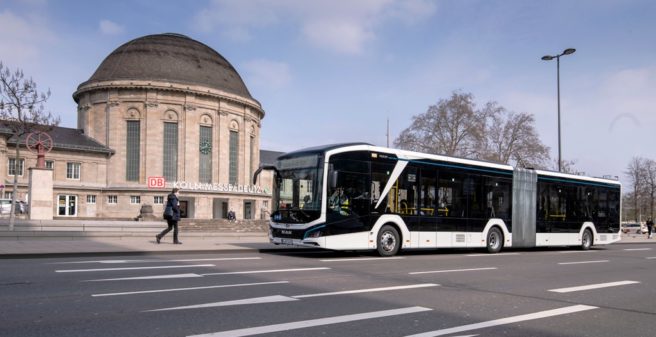 MAN Truck & Bus handed over the first fully-electric articulated bus for everyday use to the Kölner Verkehrs-Betriebe at the end of March. More than 330 buses pull up at around 750 bus stops every day in Cologne, covering a network of almost 600 kilometres. By 2030, the Kölner Verkehrs-Betriebe AG (KVB) want to convert all bus routes to operation with electric buses. From the beginning of April, a MAN Lion’s City 18 E is now in operation in the city on the Rhine with zero local emissions, taking passengers on route 127 – one of the longest lines in the KVB bus network – to their destination safely, comfortably and in an environmentally friendly manner. “It’s the very first fully-electric articulated bus we’ve delivered to a customer and it’s now showing what it can do on KVB scheduled services in Cologne. That was, of course, also something special for us,” says Rudi Kuchta, Head Business Unit Bus at MAN Truck & Bus.

“We have been driven by the topics of climate protection, environment friendly drives and innovations for many years. And we have been pursuing a clear strategy of reducing emissions as far as possible. That is why e-mobility is for us the future. We are therefore very delighted about being the first transportation company to use the MAN Lion’s City 18 E on scheduled services and being able to experience the state-of-the-art electric bus,” says Stefanie Haaks, Chairwoman of KVB.

The fully-electric articulated bus will shortly be in operation on the streets of Barcelona, making it the second MAN Lion’s City 18 E to be delivered for scheduled services. “The vehicles for Cologne and Barcelona are part of a field trial. Working together with transportation companies, we aim to gather extensive experience, which will then be used to continually improve our city buses,” says Kuchta.

A further important milestone on the e-mobility roadmap is set to start in April: series production of MAN Lion’s City 18 E will start at MAN’s Polish plant in Starachowice. The Lion’s City 12 E has already been in series production there as a solo bus since October 2020. “The aim was and is to fully integrate the series production of our electrically powered city buses with the production of conventional city bus types together on one production line. And we have succeeded,” Rudi Kuchta explains. A great deal of thought was necessary to fully integrate the production. After all, on the electric bus, around 30 to 40 per cent of the body shell alone is different to that of its conventional counterpart. Then there is the electric driveline, the batteries and other high-voltage components. That is why before starting production in Starachowice, new systems had to be purchased or existing ones upgraded, processes had to be re-engineered and around 3,500 employees had to go through extensive training.

The first electric articulated buses to roll off the production line in Starachowice will be going to Nuremberg. At the beginning of the year, the VAG Verkehrs-Aktiengesellschaft in Nuremberg ordered 28 MAN Lion’s City 18 E in addition to 11 Lion’s City 12 E, bestowing MAN Truck & Bus with the largest e-bus order to date as part of a tender. In addition, it is also the very first order for our fully-electric articulated bus. “Orders like these, as well as the enthusiasm that the Lion’s City E sparked among drivers and passengers during the roadshow throughout Europe, impressively demonstrates the extent to which our e-bus has been well received. Not to mention, of course, what great confirmation they are for the whole team, which has worked tirelessly on developing innovative technologies and a reliable electric bus,” Kuchta emphasises.

Currently, there is another order for the Lion’s City 18 E from Uppsala in Sweden. Gamla Uppsala Buss AB (GUB) has ordered 12 electric articulated buses from MAN Truck & Bus. A première for the transportation company, since these are the first electric buses to be seen on bus routes in Uppsala. Delivery is scheduled for May 2022. In addition, the framework agreement with Gamla Uppsala Buss includes an option for a further 65 MAN electric buses extending to 2023, covering 45 Lion’s City 18 E and 20 Lion’s City 12 E solo buses. To date, the company has had more than 220 buses with CNG and diesel-powered buses in operation. Around 95 percent of them are from MAN. One reason for being awarded the contract was the impressive passenger capacity that the MAN Lion’s City 18 E offers. “With a length of 18 metres, it is the perfect choice for all companies looking for a fully-electric city bus and therefore zero local emissions, and offers space for up to 120 passengers,” says Rudi Kuchta.

Two electric central motors on the second and third axles give the bus the power it needs for city traffic. The second driven and electronically synchronised axles have a positive effect on the handling of the articulated bus – especially in relation to driving stability and as a result also on safety. Moreover, the two driven axles increase the maximum energy recovered under braking. “The higher level of recuperation means the electric articulated bus is always highly efficient, regardless of the driver’s driving style or the topography,” says Rudi Kuchta and adds: “A very important point for the transportation companies in Barcelona, Cologne, Nuremberg, Uppsala and many other cities. After all, it should be possible to integrate the city buses into existing processes and timetables without too much effort. Thanks to their range of 270 km, that’s possible without any problems.” (Info: MAN Truck & Bus Press)