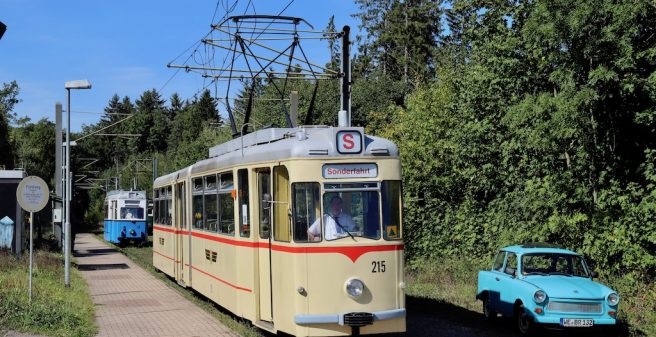 For the Anniversary many historical trams were running on the forest tram and Gotha's tram - G4 no. 215 is seen here at Marienglashöhle I © Stefan von Mach

“Those trams are amazing,” I said to my grandfather during a summer morning in 1997 when I first visited Gotha’s urban and suburban tramway. The yellow-blue livery of those trams was really eye-catching and I was impressed by the old DUEWAG engine rolling out of the depot. This was my first encounter with the Thuringian Waldbahn (literally “forest tram”) and it wasn’t the last one. My enthusiasm for one of the most beautiful tram routes in Germany and its fleet has remained even though a lot has changed since then. I no longer take photos with a rangefinder camera and both the Bochum and the Mannheim six-axle cars have disappeared. At least they are not in operation any longer – some vehicles have survived here and there: As lounges and a Mannheim GT6 is even parked somewhere in the depot as a reserve vehicle. 22 years after my first visit to Gotha, I heard that the tram is celebrating its 125th and the Waldbahn its 90th anniversary this year. Then it was all clear that I had to participate at this very special event.

On the weekend of 21 and 22 September 2019, the tram operator and the Gotha’s local tram fan club organized several events for this double jubilee. On saturday, 21 September, an „open doors“ day was organized at the depot with historic trams in operation while on sunday, 22 September, several special trips for fans and enthusiasts with several historical vehicles. There were also two very special guests: The 1934-built in Wismar tram from Nordhausen was „visiting“ Gotha and tram no. 47, built in 1963 VEB railcar factory Gotha / LEW, was shown for the first time after its refurbishment.

But let’s have a look at the history of tram operation in and around Gotha. The first plans for a horse-drawn tram in Gotha go back to the 1870s. For financial reasons, the horse tram has never been built and so it took another two decades until the construction of an electric tram was decided. On 24 May 1893, the city of Gotha decided to build an electric tram. With the company Lahmeyer & Cie., later Electric Actiengesellschaft, from Frankfurt/ Main, a contract for the construction of the first tram was signed. The first tram operated on 2 May 1894 through the streets of Gotha, linking the 2.7 km stretch between central station to Waltershäuser Strasse. The tram was operated by the power stations and tram Gotha AG (EAG).

The Thuringian forest has been a popular destination since the 18th century. Even one of Germanys most famous poets, Goethe, liked to escape the hustle and bustle of the Weimar court and regularly spent a few quiet days in the Thuringian forest. At the end of the 19th century, a rail connection was required in order to connect the Tabarz to the city and railway station. In 1897, an agreement was signed between the state government and the Gotha tram in order to build the suburban rail connection. Three years later, the EAG received the concession for this project. The work finally began in 1914 by the Thüringer Electricity Supply Company (ThELG), a subsidiary of AEG, but had to be interrupted due to the outbreak of the First World War and the inflation. Construction was only continued in 1928 and was finally concluded on 17 July 1929. The tram became very popular among the population and tourists.

In 1951, the tram operation was renamed into the publicly owned enterprise (German: Volkseigener Betrieb; abbreviated VEB) which was the main legal form of enterprises in Eastern Germany. At the same time, the fleet was modernized with new vehicles from Gotha’s railway construction company which supplied a number of „Gotha-type“ 2-axle trams. While numerous two-axle vehicles were delivered in the 1950s, the company also produced 15 G4 4-axle articulated trams in 1967. These were the last trams to be produced in Gotha as by regulation, trams were only allowed to be built by the Czechoslovak company Tatra from 1967 on.

Back to Gotha’s tram: In 1964, a turning loop at the main station and in 1966 at the terminus of the Waldbahn in Tabarz were built so that the new unidirectional vehicles could be operated more easily. In 1971, the new line in Waltershausen was put into operation. In 1981, Gotha received six brand new KT4D railcars from Tatra (No. 301 – 306) of which some were first delivered in beige, then in yellow and white for the urban tram and in blue and white for the Thuringian forest tram respectively.

After the fall of the wall

In 1991 the company was renamed Thüringerwaldbahn and Straßenbahn Gotha GmbH (TSWB Gotha) and the gradual modernization began. This includes the introduction of a common livery, with the „urban“ yellow and the „suburban“ blue being converted into a yellow-blue livery which survived until today. First, the aging fleet had to be replaced. In 1991, six second-hand GT6 trams were taken over from the Mannheim tram, followed by four more in 1993. In 1995, the Waldbahn also purchased four GT6 bidirectional vehicles from Bochum which were used from 1996 onwards. The six KT4Ds were completely modernized in cooperation with Kiepe-Elektronik in 1997 – 2000. In addition, numerous KT4D from the neighboring city Erfurt were taken over in the years 2001 – 2008 of which 14 trams are in use today. These KT4D have been built in 1981 – 1990 and some still carry the original Erfurt paintwork in red and white. Seven vehicles (309, 310, 312, 313, 314, 315 and 319) were modernized to KT4DM and received new control electronics. Two trams, 316 and 317, were rebuilt for bidirectional operation on branch line 6 to Waltershausen.

In addition to the renovation of the infrastructure, a new line was put into operation: On 23 March 2002, a branch (to the hospital) was opened in Sundhausen at the outskirts of the city. The route network now has a length of 7.5 km on the city network and 18.2 km on the Thuringian forest tram. Only one tram line has been closed so far during GDR times. The then line 3 led from the Huttenstraße with three intermediate stations to the main cemetery in the north of the city and was shut down on 30 June 30 1985.

The urban tram and Waldbahn today

125 years after the opening of the tram and 90 years after the opening of the forest railway, both tram operations are in excellent condition. Although passenger numbers have fallen since the fall of the wall, operations have survived thanks to political and financial support and the passionate workers of the tram operation. In 2016, a private bus company tried to take over the regular services of the Waldbahn. However, the plan was dismissed at the state administration office.

Fit for the future

Even today, the “Thuringian Waldbahn” is a popular destination and means of transport for tourists. It connects the central station and Tabarz in the middle of the mountains via Waltershausen and Friedrichroda which is an attractive spot for both families and hikers.

In recent years, Gotha’s trams have been made fit for the future thanks to further investments. In addition to the installation of modern traffic signal systems and infrastructure refurbishment, this also included the modernization of the terminus at the central station. A modern public transport terminal with a connection between the trains of the Deutsche Bahn, buses and trams has been installed. The roof of the new terminal is adorned with Goethe’s quote “Because you really do not travel to see and hear the same things on every station”, which is especially well visible in the dark.

In order to enable barrier-free travel, four GT8N trams of the Rhein-Neckar-Verkehr GmbH (RNV) from Mannheim were taken over at the end of 2011. The first operation took place in October 2012. After an accident, a car no. 522 was scrapped. However, a fourth tram (no. 516) has been taken over as drive school unit.

In the short-term, the number low-floor trams will further increase: the operator procured six trams from Baselland transport of Basel’s suburban tram in 2018. These are car types Be 4/8 which were built in the years 1978 – 1981 by the company Schindler and later extended with low-floor sections. The adaptation and homologation work is still ongoing. It is not clear at this point in time when the Be 4/8 will enter the passenger service. The original Gotha KT4D’s from 1981 will be retired except for the car 304 which is currently receiving a main inspection with a historic beige livery. The former Erfurt KT4D’s will remain in service for some time.

An overview of the history and the rolling stock of the Thuringian Waldbahn and tram Gotha as well as about the activities of the Gotha tram fan club “Gothaer Straßenbahnfreunde e. V.” can be found here (in German):

The official hompage of Gotha’s tram operations can be found here:

10 Most Interesting Tram Places With Less Than 50,000 - Distrita

[…] and special. The network is 25.7km in size, with 5 lines running in the city. Most of the network uses old stocks so in this German town you can grasp some history rolling on its tracks. Also worth mentioning is […]