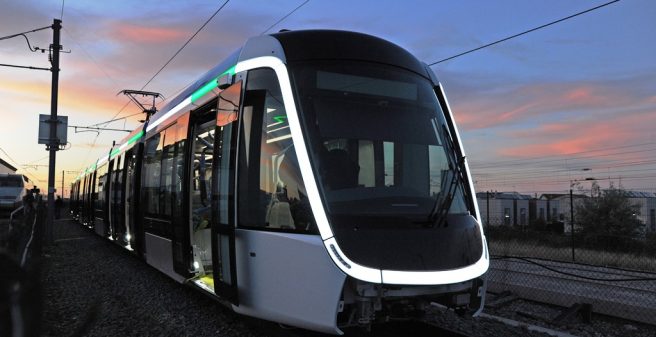 The first seven-car Citadis for Paris tram line T9 at Alstom's La Rochelle plant - the exterior light stripe starts at the vehicle front and goes all over the vehicle to the other end I Photo: Île de France-Mobilites – Y.Ronzier

The very first pictures of Alstom’s latest creation are available. The first Citadis for the new Paris tram lines T9 and T10 have just left the final assembly line of Alstom’s factory in La Rochelle in South Western France.

The iconic design is an eyecatcher at very first sight. It has been developed as a partnership between the Design&Styling teams of Alstom and the agency Design Saguez & Partners. What is so special about it? Probably for the first time, illuminated light stripes have been installed both at the vehicle exterior and interior. Especially at night, the vehicle “glows giving the vehicle a very special look. The position of the passenger access doors is marked – green when the doors are open and yellow when closing – this helps passengers and persons with reduced mobility to locate the doors in the darkness.

In fact, the design has been chosen in the beginning of 2017 via a public voting. 75 % of the participants were in favour of the so called “tram lumière” – the “light tram”. The trams of line T9 and T10 will also be the first ones to receive the new Ile de France Mobilités (IDFM, the re-branded land transport authority of the Paris region) blueish livery – in contrary to the jade green so far used by RATP.

The trams for lines T9 and T10

Inside the tram, the route maps are dynamic and the information screens are positioned lengthwise. The passenger exchange ratio has been increased by over 20% thanks to the 8 double doors on each side. Interior comfort has also been optimised through bench seating and an improved visualisation of the opening of the doors. 44 metres long, the 7-car Citadis X05 for line T9 are able to transport over 314 passengers. It is equipped with Wi-Fi connection, 100% LED lighting, and large glass windows.

Alstom is supplying 22 Citadis trams to Ile de France Mobilités (the Paris region land transport authority) for line T9 in Ile-de-France, for an amount of 70 million euros. This is part of a framework contract which also covers the potential supply of 68 additional trams for lines T9 and T10. The trams will be delivered from mid-2019 onwards with commercial entry into service scheduled for the end of 2020. Lines T9 (10 km) and T10 (8.2 km) will respectively serve Porte de Choisy (Paris) to Orly ville, and Clamart to Antony. 95,000 passengers per day are expected on these two lines by 2021. Line T10 will enter service at the end of 2023. Construction work started in the beginning of 2019.

Tendering and operation of the lines

Also, IDFM is tendering the operation of parts of the network, including the new tram lines. Instead of Paris public transport operator RATP, Keolis (a SNCF group subsidiary) has been awarded the operation of line T9. The tendering process for line T10 is still ongoing.

Further information can be found here: