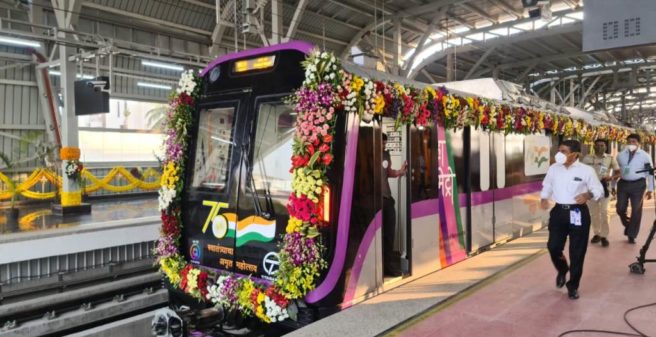 It is colourful, the 15th new metro in the country: No less than the Prime Minister Shri Narendra Modi himself inaugurated the new public transport system in the megacity of Pune today, on 6 March 2022, in a decorated inaugural train.

A total of 33 km of metro system has been under construction in Pune since 2016, partly underground but mostly on elevated alignment. This first basic network comprises two lines, of which the first two sections, together about 11 km long, have started passenger service.

Another network scheme can be found here:
https://www.urbanrail.net/as/in/pune/pune.htm

The north-south corridor from PCMC to Swargate (Purple Line) runs through the industrial area of Pimpri-Chinchwad and on to the old Peth districts of the city. The length of this line is 17.5 km with 14 stations. 6.1 km and 5 stations of these are underground. Due to extremely congested areas of Shivaji Nagar and Old Peth with very narrow roads in most areas, 6 km of the section from Range Hills to Swargate is underground. Just over 6 km of the Purple Line with 5 stations from PCMC to Phugewadi, all above ground, became operational on 6 March 2022.

The east-west corridor from Vanaz to Ramwadi (Aqua Line) is completely elevated – it starts at Vanaz Depot in the east and passes through densely populated residential areas. There are a total of 16 stations here over a length of 15.7 km. 5 km from Vanaz to Garware with 5 stations have now been opened.

Maha Metro (Maharashtra Metro Rail Corporation Limited) is a 50:50 joint venture of the Central Government of India and the Government of Maharashtra and has implemented the metro project on a project finance basis with participation of, among others, EIB (Luxembourg and AFD (France).

In future, the fleet will consist of 26 four-car trains in aluminium construction, which will be supplied by the manufacturer Titgarh – Firema. The first coaches arrived in Pune in October 2021. They are certified for Vmax 95 km/h.

In addition to the 33.2 km currently being built by Maha Metro, another 23.3 km elevated line with 23 stations from Shivaji Nagar to Hinjewadi has just started construction by the Pune Metropolitan Region Development Authority on a PPP basis in January 2022. The concession contract for this line was awarded to Tata-Siemens JV.