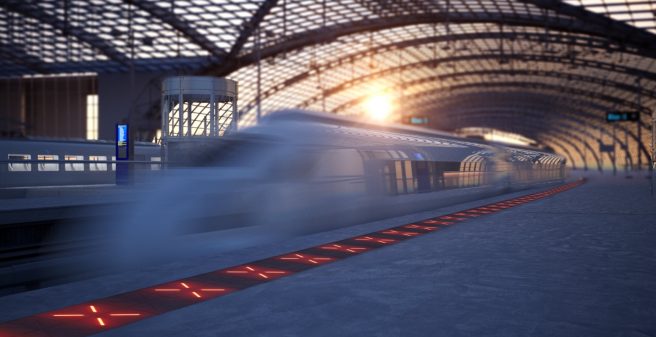 From now on Urban Transport Magazine will report on a regular basis on innovations from the transport industry. Today, we are having a look at SIUT, a start-up from Berlin which was founded in 2015 and specializes in the production of light-emitting platform edges which are called light fiber concrete.

Everyone has experienced this or a similar situation at a platform: Which way to go, especially in the darkness? Or did you ever wonder where to position yourself at a platform in order to be at the right door position? There might be a solution to these issues thanks to SIUT’s light-emitting platform edges and surfaces. SIUT is a scientific spin-off of the Technical University of Berlin from the departments of building materials and construction chemistry. The company was founded by Benjamin Westerheide and Vincent Genz. Both had integrated light fibers into concrete for the first time in 2012 in their garage. The background to this was provided by the cooperation with a professor of building material science specializing in concrete.

Today, the company develops and sells a composite material that, for the first time, enables light to be integrated into concrete. Light spots are integrated into the surfaces, but are turned off during the day. For the passenger walking on this surface, the light spot is neither visible nor does it influence the surface area. The SIUT light fiber concrete is characterized by a novel manufacturing process, which until then did not exist in this form on the market and is now patented in Europe. Via an innovation program of Deutsche Bahn, the focus has been shifted to infrastructure-relevant applications in transportation.

SIUT’s light fiber concrete can be used in a variety of applications. SIUT initially focused on design and infrastructure. In the field of infrastructure-relevant products, SIUT differentiates between base plates with flashing warning signals for passenger guidance and dynamic displays. A first test was used in Berlin at Anhalter Bahnhof. This was an early test environment for guiding people. About 15 concrete tiles were installed to guide people using a simple, pulsating arrow pattern. The setup was in operation for three weeks, and it successfully tested how people react to light signals integrated into the ground.

The dynamic escalator surface display is already in use in the following cities today:

In addition, SIUT’s team is in talks with various operators in the DACH region (Germany, Austria, Switzerland) and Scandinavia as well as with potential customers from the Gulf region.

Within the next two years, the deployment for three Category 1 (so-called mainline) stations is already in the planning stage. In addition, several nodes are to be equipped on trunk routes in German cities.

In addition, public transport operators of the German cities of Munich, Nuremberg and Dresden have shown increased interest in using SIUT’s products and discussions are also ongoing for an application in their respective networks.

What are the advantages of SIUT?

SIUT products consist of concrete and integrated light stripes. For the first time, the company has launched a manufacturing process that enables the targeted integration of optical waveguides in UHPC (Ultra High Performance Concrete). The developed light fiber concrete is characterized by a novel manufacturing process that has not yet existed in this form on the market. Thanks to a newly developed guide system, the arrangement of the optical waveguides in the concrete interior can be carried out within the concrete body in a targeted manner. Thanks to the combination with electronic control, the material becomes intelligent.

In addition to the projects mentioned above, which are due within the next two years, SIUT is currently working on the further development of its products and technologies.

Previously, concrete slabs were used as displays to visualize input and interpreted data. The patented composite concrete (light fiber concrete) from SIUT is now to be further developed into an intelligent, energy-efficient product. The company is working on the integration of various sensors in order to master not only data entry but also data collection itself. The goal is to develop products that interact with the environment while being easier to build.

SIUT currently has 10 employees and one or two students from relevant areas. In addition, interns from other European countries are working for SIUT regularly.