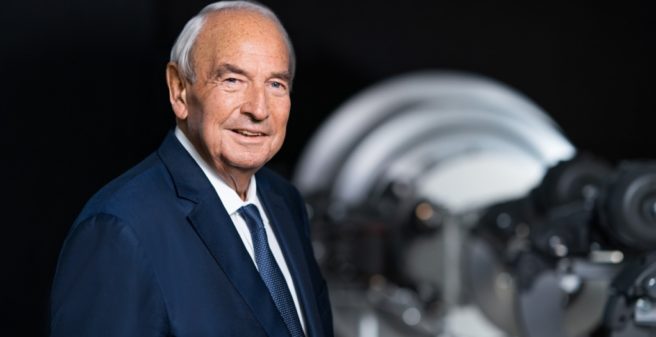 The entire company mourns with the family about the loss of Heinz Herrmann Thiele, majority shareholder and long-time Chairman of the Executive Board and Supervisory Board of Knorr-Bremse AG I © Knorr Bremse

The entrepreneur Heinz Hermann Thiele, majority shareholder and long-time Chairman of the Executive Board and Supervisory Board of Knorr-Bremse AG, passed away on February 23, 2021, at the age of 79, surrounded by his family in Munich.

Heinz Hermann Thiele was one of Germany’s leading entrepreneurial personality. Through his entrepreneurial vision, in more than 35 years he built up the Knorr-Bremse Group from a medium-sized company in a difficult economic situation into a profitable, globally successful corporation with almost 30,000 employees and annual sales of around EUR 7 billion. To this day, more than a billion people around the world place their trust in the company’s pioneering technologies for greater safety on rail and road. He has always combined his entrepreneurial and personal success with social responsibility. As a patron, Thiele not only founded the nonprofit organization Knorr-Bremse Global Care e.V. in 2005, but also supported numerous other social and scientific projects around the world. In Munich, Thiele’s sponsorships included the Bavarian State Opera, the Lenbachhaus, the Deutsches Museum and the Technical University of Munich. Among many other honors, he was awarded the Federal Cross of Merit (Bundesverdienstkreuz), First Class, the Bavarian Order of Merit (Bayerischer Verdienstorden) and, in 2015, the German-Brazilian Personality Award.

As a visionary entrepreneur, Heinz Hermann Thiele had already placed the management of the company in the hands of external managers almost 15 years ago. A further step towards securing the future viability was the IPO in 2018, when he opened the company to the capital market and other investors. Today, the development of the company is in the hands of a highly experienced management team that will continue Knorr-Bremse AG’s successful growth trajectory together with the Supervisory Board and the employees in the spirit of Heinz Hermann Thiele.

Thiele, a dedicated entrepreneur, described discipline, fairness, willingness to perform and a sense of responsibility as his most important principles. On this basis and with a high level of personal commitment, he developed the medium-sized Munich supplier into a technology group and world market leader. In the process, the pioneer Thiele relied on an internationalization strategy at an early stage. As early as the 1970s, he established strategically important contacts in North America and Japan, as well as in the then emerging markets of India, South America, Russia and especially China, where the company is still strongly positioned today. He successively built up the Group’s global production and sales network with extensive regional value creation and personal customer proximity. Today Knorr-Bremse is a global Group with more than 100 sites in over 30 countries.

After leading the company for more than two decades as Chairman of the Executive Board, Mr. Thiele relinquished operational management and moved to the Supervisory Board as Chairman in 2007. In this body, he always contributed his knowledge to the benefit of the company. At the same time, he increasingly devoted himself to his many other entrepreneurial and personal interests.

Heinz Hermann Thiele was born in Mainz on April 2, 1941. After fleeing from East Germany due to the war, he grew up in Vlotho (Weser) and Minden (Westphalia), where he graduated from high school in 1961. His father, who returned from captivity in 1945, resumed his work 2/2 as a lawyer and notary in 1951, but died in 1963 at the age of 61. Heinz Hermann Thiele grew up in modest circumstances after the loss of the family property in destroyed Berlin. Nevertheless, Thiele was able to take up law studies at the University of Munich in the winter semester of 1962/1963. “In retrospect, I took advantage of the extremely limited financial circumstances and the father figure I sorely lacked to create something on my own,” Thiele later said.

In 1969 he began his career at Knorr-Bremse as a legal clerk in the patent department. From 1975, Thiele was entrusted with the development and expansion of the Commercial Vehicle Systems division, and in 1979 was appointed to the company’s Executive Board, where he served for 28 years. In 1987, he became Chairman of the Executive Board of the Group, whose shares he successively acquired from 1985 onward.

From 2007 to 2016 Thiele was Chairman of the Supervisory Board of Knorr-Bremse AG, and from July 2020 Deputy Chairman. In 2016, Heinz Hermann Thiele was appointed Honorary Chairman of the Supervisory Board. Heinz Hermann Thiele devoted his entire life to the service of Knorr-Bremse and a wide range of other entrepreneurial activities. He leaves behind a unique and extraordinary life’s work.

The entire company mourns with the family.

Obituary - Cause of Death : The entrepreneur Heinz Hermann Thiele, majority shareholder and long-time Chairman of the Executive Board and Supervisory Board ...

[…] Board and Supervisory Board of @KnorrBremseAG, passed away on February 23, 2021, at the age of 79: https://www.urban-transport-magazine.com/en/knorr-bremse-mourns-the-death-of-heinz-hermann-thiele/ #publictransportRead […]