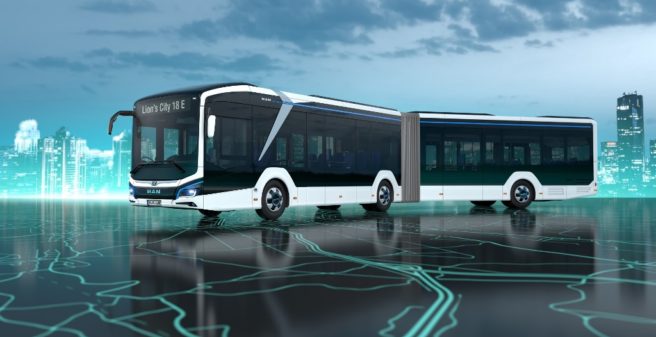 Celebrating its première: in the second half of 2020, the first MAN Lion’s City 18 E vehicles are set to enter scheduled-service operation in Barcelona and Cologne as part of two field trials. | © MAN Truck & Bus

The sales of the MAN Lion’s City 18 E electric articulated bus has begun in April 2020. In the second half of 2020, the first demo buses will already run on the streets in Barcelona and Cologne.

As part of its e-mobility roadmap, MAN Truck & Bus is sending a fleet of demo e-buses to customers in five European countries this year. The fleet comprises 15 test vehicles, which will be deployed as part of everyday operations. This testing programme includes two field trials with the new MAN Lion’s City 18 E, which will be premièred on the streets of Barcelona and Cologne as part of scheduled-service operations there. Sales of the new electric articulated bus started back in April. “Measuring 18 metres long, the MAN Lion’s City 18 E is the perfect choice for any company looking for an all-electric city bus, i.e. one that does not produce any emissions locally, with space for many passengers,” underlines Rudi Kuchta, Head of Business Unit Bus at MAN Truck & Bus.

Two electric central motors on the second and third axles give the bus the power it needs for city traffic. In contrast to electric motors positioned close to the wheel hubs, these models are easier to access and have a simpler design. As such, transport operators benefit when it comes to maintenance work and the Total Cost of Ownership (TCO). The two driven axles are electronically synchronised and also help to improve the handling of the articulated bus as they boost driving stability and, in turn, the level of safety. What’s more, the articulated bus comes with an anti-jackknifing control system and kink angle control system, which further improve driving stability. Critical jackknifing situations can thus be prevented in advance as the drive torque can be selectively distributed to the two driven axles in line with the specific situation at hand.

Moreover, the two driven axles increase the maximum energy recovered under braking. “The higher level of recuperation means the electric articulated bus is always highly efficient, regardless of the driver’s driving style or the topography,” comments Rudi Kuchta. In the MAN Lion’s City 18 E, the fully electric driveline produces between 320 kW and a maximum of 480 kW. The energy for this comes from the modular batteries with 640 kWh of installed capacity. Here, MAN relies on the fully developed lithium-ion (NMC) battery cell technology from the Group’s modular kit. The batteries have an intelligent temperature management system that has been optimised for use in city buses. This system ensures that the batteries are always readily available, regardless of the time of year. As a result, the MAN Lion’s City 18 E impresses with a range of 200 km (and up to 270 km in favourable conditions) over the entire service life of the batteries.

There are a total of eight battery packs, which are located on the roof of the articulated bus. This is advantageous because it means the batteries are located away from the rear of the vehicle, which is an area at higher risk of a collision. It also means they are easier to access for servicing. The batteries are charged at the depot via a Combined Charging System plug (CCS). With an average charging power of 100 kW and a maximum power of up to 150 kW, the articulated bus can be fully charged in less than four hours.

The use of an electric drive system has also benefited the vehicle’s interior, as the engine tunnel has been omitted. This gave the developers plenty of scope to optimise the rear of the vehicle. “And they took full advantage of this, providing more pleasant lighting and four additional seats in the rear. These features already appear in the 12-metre solo bus version and are highly appreciated by our customers. In the electric articulated bus, they also further improve the level of comfort and provide a more pleasant ambience inside,” explains Rudi Kuchta. The 18-metre version of the Lion’s City E can carry up to 120 passengers – but that’s not a problem for the new electric MAN bus, since the use of alternative drives enables a higher permissible gross weight of up to 30 tonnes.

However, the interior design and technical features are by no means all that the all-electric MAN Lion’s City E has to offer. Its exterior design, too, cuts a fine figure in city traffic. It boasts a sophisticated, contemporary ‘smart edge’ design, adding a new, dynamic flair. Indeed, it was not for nothing that the iF International Forum design panel awarded the electric MAN bus the iF Gold Award in the category “Automobile/Vehicle/Bike” this year. “The MAN Lion’s City E rounds off the new generation of city buses as the emission-free version boasting an award-winning design. With the launch of the 18-metre version, we’re delighted that we can now offer all transport operators and city authorities a highly efficient vehicle for high-frequency routes with a first-rate design befitting its urban environment,” adds Rudi Kuchta.

In December 2019, MAN Truck & Bus delivered the first two 12-metre electric buses to the transport operators Hamburger Hochbahn AG and Verkehrsbetriebe Hamburg-Holstein GmbH for everyday use in the Hanseatic port city. This year, another 13 demo vehicles will be deployed in practice as part of the e-mobility roadmap. Over the course of 2020, the demo fleet of 15 electric buses in total will then be running customers’ services in five European countries (Germany, Spain, Luxembourg, Belgium, France). As part of this testing programme, MAN will also hand over the 18-metre electric bus to the transport operators Kölner Verkehrs-Betriebe AG (KVB) in Cologne and Transports Metropolitans de Barcelona (TMB) in Spain, in order to conduct the planned practical testing there, too. The first mass-produced MAN Lion’s City E 12-metre solo-version buses are set to be delivered to customers in the fourth quarter of 2020. The fully electric Lion’s City E in the articulated bus version will follow approximately six months later, and should go into series production in the first half of 2021.