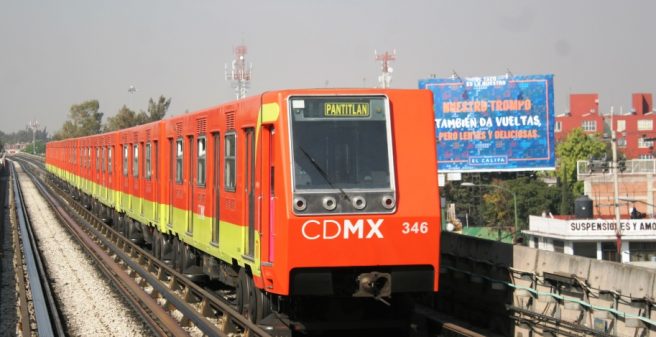 Even the Google Doodle – that is how Google calls its’ logo is used to commemorate holidays, events, achievements, and notable historical figures – has been altered to Mexico’s metro iconography for its’ 50th birthday in Mexico. On 4 September 2019, the metro of Mexico City, became 50 years old. On this day in 1969, Mexico’s first 12.7 km metro line of the Sistema de Transporte Colectivo (STC) started operation between Chapultepec and Zaragoza. The metro was inaugurated by the then-president Gustavo Días Ordaz and the city’s mayor Alfonso Corona del Rosal who both took the inaugural train. Commercial operation started on 5 September 2019. The rolling stock was supplied by the then called French company Alsthom (today Alstom). The so-called pneumatic metro, MP68, was built in Paris and shipped to Mexico. Alsthom supplied a total of 60 trains between 1968 and 1970. Construction of Mexican rolling stock only started in 1972 by Concarril, today part of Bombardier Transportation.

The history of Mexico City’s metro

The main motivation for the construction of the metro in Mexico City was the massive population growth in the 1950’s and 1960’s. Mexico City used to have 540,000 inhabitants at the beginning of the 20th century. In 1953 the numbers rose to 3.5 million and in 1960 there were 4.5 million people living in the city. The existing tram, trolleybus and bus system were not sufficient to bear the transport demands and discussions to introduce a metro system started. In the beginning, the government was reluctant to implement a metro due to the geographical preconditions, leading regularly to strong earthquakes. After several technical studies, the Días Ordaz administration approved the metro plan and construction started in 1967. The first section of line 1 runs fully underground and has been built with the cut-and-cover method. During the construction phase of line 1 and the other metro lines, many Aztec monuments have been discovered in the grounds of Mexico City. This is not surprising as the city has been built by the Spaniard colonists on the grounds of the destroyed Aztec capital “Tenochtitlan”.

In the upcoming decades, Mexico’s metro has been widely extended. Today, STC, the metro administration, is operating a network of 200.8 km with 25.7 km of service track, summing up to a total of 226.5 km. Today, the network consists of 12 lines of which 10 lines are pneumatic lines (similar to the metros in Paris and Montréal), running on rubber tyres. The reasoning behind this was higher acceleration and better riding comfort. Only two lines, line A and line 12, are running on steel-wheels. An chronologic overview of all extensions can be found here: https://www.metro.cdmx.gob.mx/cronologia-del-metro

More than 5.5 million passengers are using the metro every day – making it one of the busiest metro network worldwide. The rolling stock consists in 3,333 metro cars which are coupled in six-, seven- and nine-car trains. CAF is currently delivery 16 new NM-16 trains, built in Mexico, which are operated on line 1. Further rolling stock investment is planned as the trains and operation are suffering from reliability and spare-parts issues.

The metro’s symbols and iconography

Lance Wyman, a Canadian designer, developed a specific iconography and branding for the metro in 1968/67 which is still used today. First and foremost, each line has its’ specific colour. Most Mexicans refer to the pink and blue line, instead of saying “line 1” or “line 2”. Secondly, each station has been fitted with a specific symbol, representing the meaning of the station. By doing so, orientation for younger passengers, illiterates and foreigners is made much easier. And of course, the metro ride gets more fun.

Furthermore, the metro is also used as a space for historical and artistic installations. Several stations showcase archaeological findings of the Aztec times whereas other stations have been decorated with artistic and historical drawings. One of the metro entrances of the “Bellas Artes” station features a Paris-style Guimard entrance which is the result of the Mexican-French cooperation.

The metro’s anniversary was accompanied by a number of cultural and historical events. In the city centre, several famous Mexican artist such as “La Sonora Dinamita”, “Santenera” and “Flor Amargo”. Several historical tours have been organised as well as short-film festival.

For many, the 50th birthday is also an occasion to look with a more critical eye at the current situation of the metro. The financial and technical situation of the metro is rather worrying after decades of underinvestment. Only ca. 73 % of the rolling stock is operational while the remainder is out of service. Apart from the 16 new CAF trains being delivered in 2019, the last large-scale fleet renewal took place in 2002 – 2006 with the delivery of the NM-02 fleet, built by Bombardier Transportation México and CAF. Stations, the infrastructure and signalling have not been modernised since decades, leading to congestion, overcrowding and low riding comfort – especially in the rush hour. According to media reports, the new government of Claudia Sheinbaum – elected in December 2018 – wants to further invest into Mexico’s metro.