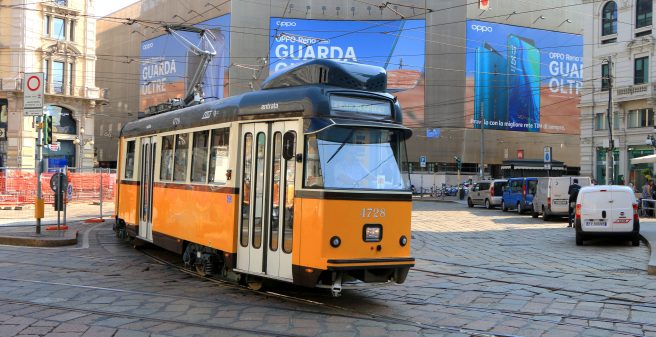 Although ATM Milano, Italy’s largest tramway operator, had announced that Stadler is the winner of a tender process for 80 new tramways to renew its fleet some months ago, the comprehensive refurbishment program to recondition older vehicles continues.

The 100 cars strong series 4900 of double-articulated high-floor trams built during 1976-1978 is undergoing an internal and external modernisation process. The program started already 5 years ago and today approximately half of the series has been updated. The renewed cars can be clearly distinguished from the older ones by the change of the external design, including front and back end.

Although it was not specified, which trams will exactly be replaced by the 50 new low-floor Stadler city tramways of the future order (the other 30 will be in service on the interurban network) it was decided to also begin with the upgrading of the 20 “all-electric” articulated trams of series 4700 built between 1955-1960 by Stanga/TIBB and usually in service on routes 2 and 19. The first new tram no. 4731 was presented in late 2017. It is fitted with air condition mounted on the roof of the car. Other external and internal elements were changed and upgraded to modern standards, as well as the outside livery to some minor extent. Two more cars, no. 4728 and 4732, are in service and others will follow. The fate of the remaining 10 of the once 13 cars of subseries 4600 built in 1955 is not clear, yet. There is an option to submit them to a similar renewal process or, alternatively, to send them to the scrapyard. The external design of the 4600s is identical to the 4700s. The series 4800 was also of very similar external design as the 4600/4700, but with eight axles. These were all taken out of service by 2012, only one car has been preserved as part of ATM’s heritage fleet.

The future of the remaining vehicles of the famous “Peter Witt” tramways built between 1928- 1930 looks bright, although the number of these “Ventottos” – as they are locally referred to – in regular service might be reduced upon arrival of the new low floor tramways. Currently, there are 172 of the Peter Witt cars in stock, however, only 151 of them are in operating condition. Almost all of them have been painted in the white and yellow livery, only very few remain orange. Most of the vehicles refurbished in recent years have got overall external advertising and are mainly used on the cross-town route 1. The “Ventottos” have already gained the status of a tourist attraction in the city and will certainly play a vital role in Milan’s street live in the next decades. After some 90 year in service they still perform surprisingly well. Other routes where they are in service include lines 5, 10, 19 and 33.