Nancy is paving the way for a new tram 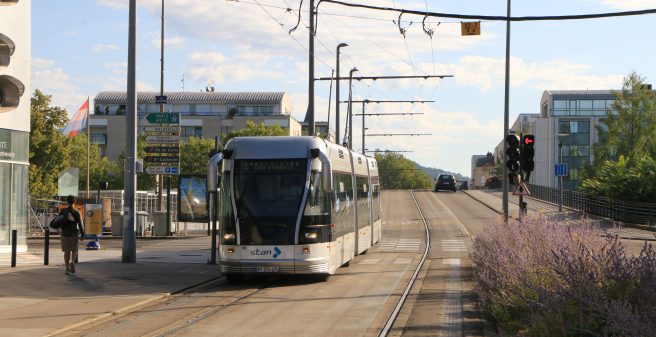 Today, the „Enquete publique“ starts: The citizens of Nancy – located in the French province of Lorraine – have the right to express their opinions and to make suggestions with regard to a project, that is under discussion in the city for quite some time: the new low-floor tramway.

The new tram would replace the unsuccessful „tram on rubber-tires“ system TVR (Transport sur Voie Réservée), which in turn had replaced the former three-line trolleybus (DUO bus) in 1999, when the fleet of 48 articulated DUO buses had to be replaced after 16 years in service. However, only one, a 11.1 km long stretch commenced operation in 2000. Gas buses continued to operate on the orginally planned TVR-lines.

Bombardier developed and marketed the TVR, but at the end of the day, it was only in use in two French cities, Nancy and Caen. The three-section atriculated vehicles run on rubber tires and are guided on the designated parts of the route by a center rail. In Caen the vehicles had pantographs and needed the guiding rail for operation in electric mode over the entire route, only for depot access they used a small auxiliary diesel engine.

In Nancy, the vehicles have two-pole trolley booms and they can also be operated off the guided sections without the central rail, in practive as ordinary double-articulated trolleybuses. The system quickly showed major technical problems and disadvantages: Derailments of the guidewheel occurred frequently right from the beginning causing a complete full-stop of operation in Nancy for many months during 2001. Since then speed limits on some curves were introduced, sometimes as low as just 5 km/h. All special work – frogs e.g. – was simplified and/or taken out of use. The quality of the ride in the vehicles was always poor, as the road surface quickly deteriorated due to the fact, that the tyres always run exactly on the the same part of the road. Rattling and shaking were part of every ride – however, the passengers got used to it.

Caen decided to abandon the system and to build a new low-floor tramway using most components of the track bed – TVR service ended on 31 December 2017. The new tram was inaugurated on 29 July 2019 – we published a report on this event: https://hosting129892.a2e10.netcup.net/en/t-day-in-caen-new-tramway-inaugurated/

12 vehicles from Caen were sold to Nancy and are in use here as a source for spare parts. Nancy initiated a refurbishment program for its vehicles, but eventually the city will follow the Caen approach: The TVR will be phased out at the latest by 2021 and a new tramway will be built instead. It will basically use the same track as the existing system, however, a branch line will be added and different options for the very steep, final section to Vandœuvre. CHU Brabois are under consideration – including a viaduct that will undoubtedly increase the necessary budget quite substantially.

The opening of the new tramway is scheduled for 2023.

The option to use some parts of the overhead network of the old trolleybus system – still widely in place after more than 20 years (!) – is also under discussion. The introduction of a modern battery-trolleybus system was contemplated and a test vehicle from IVECO was in use in Nancy this year. However, the city council finally turned down this option.