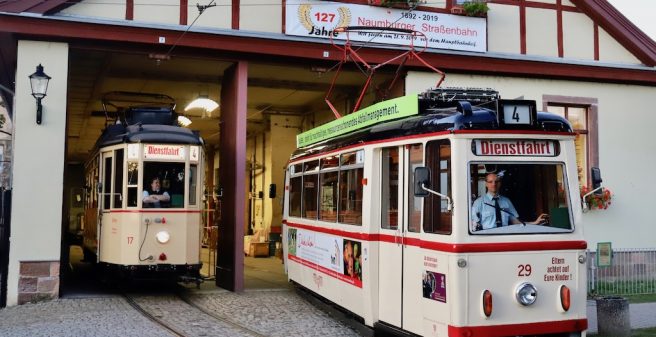 On 21 September 2019, Naumburg's tram celebrated its 127th Anniversary - the operation is now secured at least until the year 2035 I © UTM

Naumburg, a 33,000 inhabitant city in the south of Saxony-Anhalt, is operating Germany’s smallest tram system. The tram line has a mere length of 2.9 km only. For a long time, it looked as if the tram operation would be permanently shut down and survive only as a museum. However, the history Naumburg’s tram is an example of the financial, legal and economic challenges which Eastern Germany was facing with the fall of the wall, exactly 30 years ago. Lack of funding and decreasing passenger numbers led to a permanent shut-down of the system in 1991. It took years for the operations and infrastructure to be restructured and financed. Regular traffic was only resumed in 2007 – after a lot of engagement from local enthousiasts and residents. In July 2019, representatives of the city and the Naumburg tram signed a renewed operating license, which secures the operation and financing of the tram until the year 2035.

After so much work and volunteer engagement, every birthday of Germany’s smallest tram is a special occasion. On 21 September 2019, the 127th anniversary of the popular tram was celebrated with a splendid program and historic vehicles in operation.

The „Naumburger Straßenbahn-Aktiengesellschaft“ was founded in June 1892 and started steam tramway operation on 15 September 1892 – 127 years ago. The electrification took place in 1907. The inner-city route was extended in 1909 to the railway station so that the tram formed a circular route around the cathedral and inner-city nucleus. From now on, the tram operated in ring traffic. At that time, the tram even ran right through the city center. This route was closed in 1976 and a parallel route was established outside the city walls lateron.

During the Second World War, the city and its tram were damaged so that tram operation was halted between April and September 1945. Interesting detail: Naumburg was liberated by American troops in the first place and has been assigned to the Soviet occupation zone and subsequently the GDR (DDR) only later.

In the postwar period, the tram was an important cournerstone of Naumburg’s transport system. However, due to the deplorable state of the infrastructure and rolling stock, the decommissioning of the small system was discussed in the 1970s. The closure ultimately prevented by resident protests and the oil crisis. At the end, the tram, albeit in a very bad condition, survived.

With the fall of the Iron Curtain in 1989/90, passenger numbers fell sharply due to the economic changes. Many industrial companies were closed and those who could afford it, bought a private car and therefore did not need public transport any more. On 19 August 1991, tram operations were discontinued.

Volunteering for the survival of the tram

A group of enthusiasts and local residents was always committed to keeping the tram alive. The group managed to restart tram operation on 300 meters of track with a horse-drawn tram in 1994. Electric operation re-started in 1995. An operating company, the Naumburger Straßenbahn GmbH, was founded and operated the tram on special occasions. Ever since, the operating company is supported by tram enthusiast club, “Nahverkehrsfreunde Naumburg – Jena e.V.“.

The effort was worthwhile indeed: In 2006, tram operations took place for the first time again from Eastern until October on all weekends. Since 21 March 2007, the tram is running on a daily basis again – to the delight of residents and tourists. However, the tram is not operating the entire ring, but roughly half of the former ring line. The remaining track work has been removed. Since the city bus lines are numbered from 1 to 3, the tram was designated „line 4“.

In 2017, the track was extended by 440 meters to the current endpoint Salztor. However, the long-term goal is still to restore the entire circular route around the city centre. Unfortunately, large parts of the western ring were removed as part of road renewal.

Naumburg’s tram is becoming increasingly popular. The rising passenger numbers are a proof of this. Naumburg is not only a railway junction, but an important tourist destination. The small town was formerly the seat of the Diocese of Naumburg. The local landmark is the Naumburg Cathedral in the medieval old town, which has been designated a UNESCO World Heritage Site since 1 July 2018.

The tram carried over 73,000 passengers in the first year of operations in 2007/08. Since then, ridership has more than doubled with 178,600 passengers transported in 2018. The operator of the tram wants to go even further: Passenger numbers shall double. One of the strategies is to adapt the timetable and offer early and late-night traffic and improved ticketing and passenger information systems. In addition, a renewal of the depot and a feasibility study for the ring closure are also planned in the upcoming years.

One of the critical issues of Naumburg’s tram has always been the financing. Due to limited size and funds, neither the city nor the transport authority of the Burgenlandkreis were able to cover the operational losses of the tram.

From 2009 until 2010, the tram was partly financed by funds of the Saxony-Anhalt state. After lengthy negotiations, the financing of the operation by the state of Saxony-Anhalt has been ensured since then, the other alternative being only „another“ closure of the system. The tram is now part of public transport and also integrated in the transport association MDV. The city council of the city Naumburg finally decided in 2012 to take over a share of the uncovered costs. With the above mentioned operating contract, Naumburg’s tram is looking into a rather bright future.

Further information as well as timetables can be found on the website of Naumburg’s tram operator: https://www.naumburger-strassenbahn.de