New battery trolleybuses for the expansion plan in St. Gallen 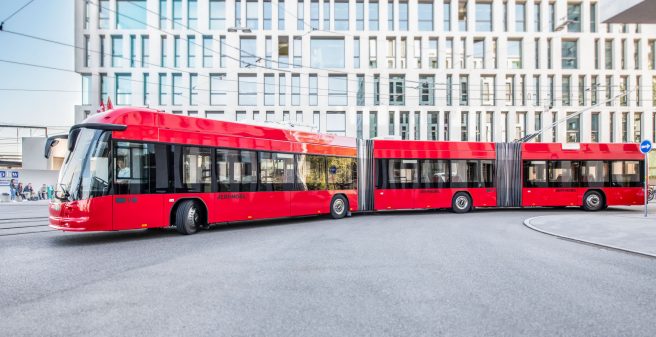 Hess Lightram 25 on loan from Bernmobil on a test ride in St. Gallen | © HESS

The city council of St. Gallen, Switzerland, decided on 11 October 2019 to award the contract for the 11 bi-articulated trolleybuses and 6 articulated trolleybuses to Carosserie Hess AG in Bellach. These vehicles will be hybrid battery trolleybuses, i.e. all have a powerful battery pack on board to allow for extensive off-wire operation. “In-Motion Charging”(IMC) means that the batteries are to be recharged as long as the buses run under overhead line sections, without any time-loss during charging at termini.

Hess will deliver its already proven Lightram® 19 DC and Lightram® 25 DCmodels between November 2020 and February 2021. For testing purposes, a bi-articulated battery trolleybus on loan from Bern has already been in St.Gallen since last September.

The costs of vehicle acquisition and the network expansion, worth a total of CHF 37.5 million, had previously been approved by the public in a referendum. St. Gallen wants to gradually replace all diesel buses with electric vehicles from 2021.