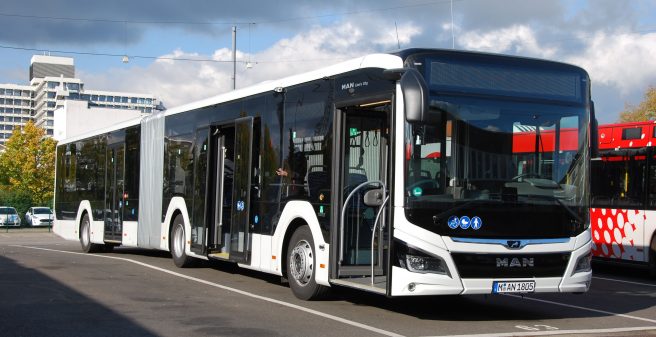 On 29 October, Bonn-based “SWB Verkehrs GmbH” held a press conference on the future of public transport in the city.

Managing Director Anja Wenmakers explained that Bonn, as one of the five German “lead cities” (that is – in order of their size – Essen, Bonn, Mannheim, Reutlingen and Herrenberg) to receive substantial funds from the federal government to increase the use of local public transport. In Bonn, these funds are mainly used for an increase in frequencies of virtually all lines, especially in the evenings and during the weekend. Almost all lines now run every 20 minutes, with a few ones even every 10 minutes. Some new lines have also been introduced.

The modal split has improved significantly from 14% for public transport in 2018 to 17% today.

Managing Director Wenmakers: “So far, we have only been promised to receive federal funding for two years. We don’t know yet what will happen after that. But we assume that after these two years, the federal government will not be able to drastically cut that support again.”

In addition, SWB announced at the press conference that seven battery electric buses had been ordered. These are four 12-metre buses that will be supplied by dutch manufacturer Ebusco. In addition, there are three 18-metre long electric articulated buses that are being built by Solaris in Bolechowo, Poland. All electric buses are recharged overnight at the depot. SWB continues using the same charging method as their first electric buses. Therefore no changes on the route layout will be required. Ebusco has now promised a range of 300 kilometers for its new “Ebusco 3.0” while Solaris offers a battery range of 200 kilometers for the articulated e-buses.

72 older diesel buses are retrofitted in a way that they subsequently comply with the Euro VI emission standard. This conversion program is expected to be completed in 2020.

Finally, the SWB are also investing in its city tram and light rail fleet. The extensive retrofit and refurbishing project of older light rail vehicles of the type “Düwag B-Wagen” will be continued and extended by a further 15 light rail cars.

The tender process for the procurement of 26 new low-floor trams has already been launched. They will be used as a replacement for the 24 existing low-floor trams dating from 1994, which meanwhile suffer from serious corrosion damage.

And there is another tender out for 22 new light rail vehicles. They are needed for frequency increases and extension of the existing light rail lines which also connect to near Cologne system via route 16 and 18.

SWB Verkehr, like almost all German transport companies, suffers from a significant staff shortage. “We try to get people interested in working with us. The next “testing” day for interested candidates will take place on November 16.”

In addition, they are trying to attract drivers in Spain and southern Italy, for example. Wenmakers: “There are actually still unemployed bus drivers.” However, language training is also needed for those from these countries. “Drivers must be able to communicate not only with passengers but also, above all, with the control center.”