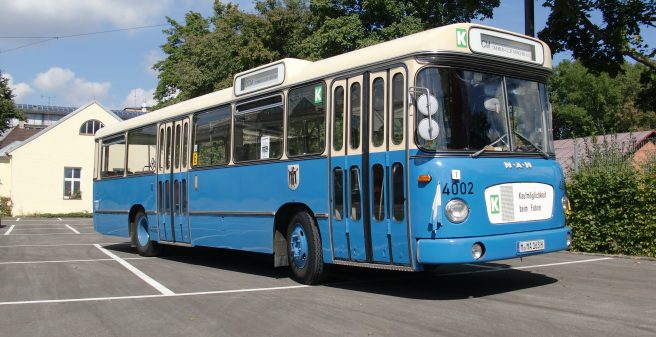 Visitors coming to Munich now have a new sight to discover – historic buses are running through the city since May 19 2019 every sunday – connecting several touristic sights in the city centre. It is a first in Germany as the buses are in original condition from the 1960’s

The Omnibus-Club München (OCM) has been taking charge of the preservation, restoration and operation of Munich’s since over 30 years. Special trips with the buses in running condition have been existing since long. For example, the bus shuttle service to the MVG transport museum has been operated with the oldtimer buses on a regular basis. However, since May 19 a specific oldtimer ringline has been launched in Bavaria’s capital. The line is named X7 and starts at the station Theresienhöhe where the transport section of the German Technical Museum (Deutsches Museum) is located. From there the line connects Poccistraße (connection to metro lines U3/6), Baldeplatz, Fraunhoferstraße (metro U1/2), Boschbrücke (main entrance to the German Technical Museum “Deutsches Museum”), Nationalmuseum/Haus der Kunst, Karolinenplatz and the Central Station (Hauptbahnhof Süd, connection to metro lines U1/2,4/5) before reaching Theresienhöhe again.