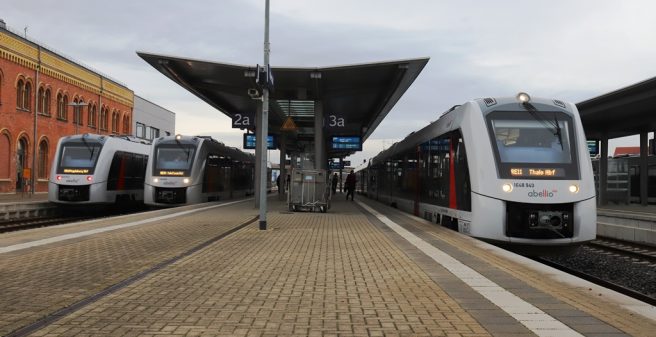 Does the Diesel train belong to the museum soon? Hybrid and alternative propulsion systems such as battery or fuel cell could replace diesel trains in the short- and mid-term I © UTM

As Germany’s capital, Berlin is an important place for policy- and decision-making. This is one of the reasons why so-called parliamentary evenings take in Berlin on a regular basis. Transport politicians and experts meet for talks and a multidisciplinary exchange on strategic and transport policy issues. The latest parliamentary evening took place on 23 October 2019 and was organised by the German Transport Forum, Parliament Group Rail, or PG Schiene (DVF, Deutsches Verkehrsforum).

What needs to be done to reduce car traffic and increase the attractiveness of public transport? How can the role of rail transport be strengthened? How can the degree of electrification of the German rail network increased and the emissions subsequently be reduced? How can the planning and planning process for new rail projects be accelerated?

These and similar questions were discussed in front of over 100 invited guests from the business, academia and industry in a panel discussion.

The German Federal Government plans to expand the electrification of the rail network from 60% today to 70% of the route network. By using trains with alternative propulsion systems on non-electrified or only partially electrified lines, the rail sector would be almost diesel-free. Rail can thus make another important contribution to the achievement of German climate protection targets.

To achieve this, however, some hurdles must be overcome. Regional trains with alternative propulsion systems must be tendered and financed. Partially, additional infrastructure, e.g. charging infrastructure or hydrogen stations, which also need to be planned, financed and built, will be necessary. It is also important that citizens are informed in the planning and construction phase of such infrastructure and that the planning and approval processes are streamlined and accelerated.

The political and financial outlook for rail and public transport investment in Germany are rather positive. Last September, the Federal Government decided to provide 20 billion EUR for the period from 2020 to 2030 as part of the so-called climate package. This budget will be used to improve the infrastructure, performance and reliability of the German rail network. Deutsche Bahn’s equity capital is to be increased by EUR 1 billion a year by 2030. Additional funds are being channeled from the € 40 billion provided by the federal government to offset the regional impact of brown coal extraction by 2038. Enak Ferlemann, MdB said: “Germany was once a rail country and must become it again. The rail sector will receive as much money in the next few years as never before. Rather, it becomes a challenge to actually use it. The federal funds alone for urban transport financing (GVFG) are increased from 330 million to one billion, later even to two billion euros.”

Cem Özdemir, Chairman of the Committee on Transport and Digital Infrastructure, also welcomed the improvement of the rail system: “We need a comprehensive and long-term investment strategy, also with regard to climate change. Rail transport is already an environmentally friendly mode of transport and it should even get better. The diesel locomotive will soon belong to the museum and instead there will be trains with alternative powertrains and fuels will be operated in an environmentally-friendly way.“

“In Germany, 60 percent of the rail network is electrified”, says Ferlemann. In order to achieve the climate goals, it would be necessary to electrify another 10 percent in the next few years, i.e. around 3,300 kilometers – and that for the major networks in long-distance and freight traffic.

“We want to bring even more traffic to the environmentally friendly rail system. For this purpose, more lines, even less traveled, must be electrified, “added Michael Donth, MP, Deputy Chairman PG Schiene. “I think that the significantly increased Federal GVFG budget is an appropriate instrument to promote this together with the federal states. But not everywhere it will make economic sense to electrify the routes since there are already hybrid and hydrogen-powered vehicles as an alternative.”

From the point of view of the authorities of local transport services, Susanne Henckel, President, Federal Association of Transport Contractors of the SPNV e.V., was able to report on her experience and pointed out the problems with electrification of routes. After that, the line legislation would be lost, new planning and approval procedures would have to be started, and the infrastructure at the stations would have to be renewed entirely. All this costs a lot of money and would make so many lines unprofitable. Henckel emphasized that to reach the climate goals it is necessary that more people use the train instead of the car. In order to make passenger use more trains, they must be reliable and punctual. “We need more passengers!“

“Climate change is not waiting. That is why it is important that we implement the best solutions quickly and with technology. For a successful modal shift from road to rail, we must finally strengthen the railways sustainably and take all of them along, even on secondary lines in rural areas. Rolls-Royce offers environmentally friendly and reliable drive solutions that can be used immediately on all rail vehicles without expensive infrastructure modifications. Our hybrid is 75 percent quieter, emits up to 30 percent less CO2 and can operate significantly tighter beats. With synthetic fuels, in the medium term, this technology will also be able to fully meet all CO2-neutral goals, “explained Dr. Günter Zitzler, Head of Application Technology Rail Engines, Rolls-Royce Power Systems.

For this, a corresponding fuelling or charging infrastructure is necessary, so it would be wise to think about whether you as an operator can continue to use the existing assets, such as through retrofitting, said Torsten Schein, Chairman of the Board, DB Energy GmbH. Schein also mentioned the following about the different propulsion concepts: “There is not that one drive concept. Deutsche Bahn therefore pursues a technology-open approach. The suitable choice and number of charging points depends on the conditions of the respective routes. This means that we will see a coexistence of different concepts, with electrification with overhead lines being the method of choice on routes for long-distance passenger and freight transport.”

“Alternately powered rail vehicles will prevail if they are a reliable and economical alternative over their lifetime. The vehicle industry has to accept this challenge. In addition, the infrastructure manager must make sure on order that all loading and tank facilities necessary for operation are ready and operational at the time of commissioning, “said Henckel with a view to the requirements of cost-effectiveness.