Qiubei: Another new tramway in China 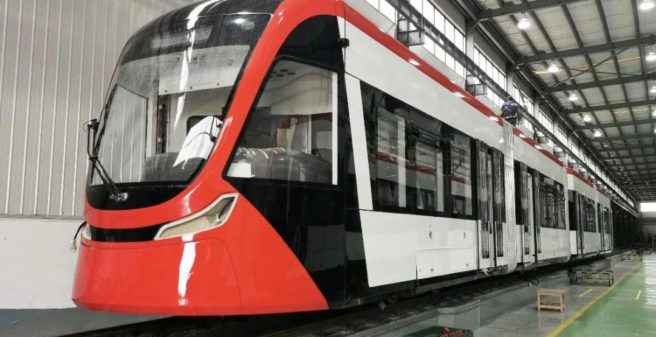 Although most of China’s new urban rail systems are built to metro standards, there are also a number of new tramway systems in the country. For now, the latest opening is the inauguration of limited revenue service of a new system in Qiubei County in the Wenshan Zhuang and Miao Autonomous Prefecture in Southern China.

A network of a total of 13,96 km was built, with the main section between the high speed railway station Puzhehei and the Central Tourist Office covering 11.7 km length and 8 stops. A branch line of the small, Y-shaped network to Jiaolian covers 3 stops. The trams largely use it’s own track segregated from any streets, partly on an elevated alignment. Only five level crossings with streets are included. Official start of public passenger was on 15 May 2021.

The area is frequently visited by many tourists, and therefore a different fare scheme applies for tourists compared to local residents.

15 four-section , 100% low-floor tramcars were supplied by CRRC Zhuzhou by March 2021. The trams use supercapacitors and lithium titane batteries which will be charged at stops in ½ minute, thus, the entire operation is catenary-free. The vehicles offer 72 seats and a total passenger capacity of 362.