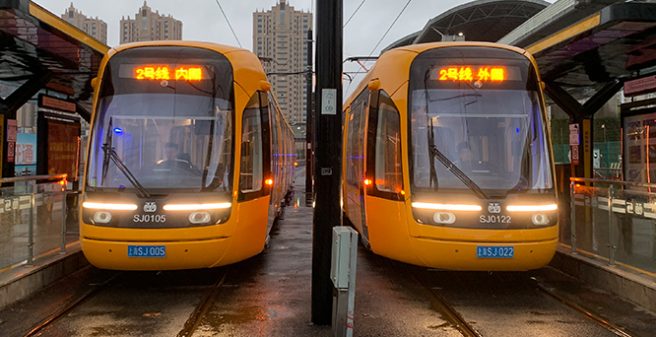 French transport group Keolis had opened its first tramway operation in China on 26 December 2018 when the first 13.9 km of a complete new network opened in the Songjiang district within Shanghai metropolitan area. The initial route T2 Canghua Road – Zhongchen Road was now completed to a full circular line on 10 August 2019, and a second line T1 was opened the same day between Jinxi Road and Xinmiaosan Road, adding a total of 12.7 km to the system.

Completion of the first stage of this new system is expected before year’s end when T1 will be extended by another 4 km from Xinmiaosan Road to Xinqiao Train station. The network has a connection to Shanghai’s metro line 9 at two interchange stations. The system is operated by a consortium of Keolis Group (49%) and Shanghai Shentong Metro Group (51%). 30 Alstom Citadis partially built in China provide the service. Passenger demand is expected in the range of some 170,000 users daily once the network is fully operational.