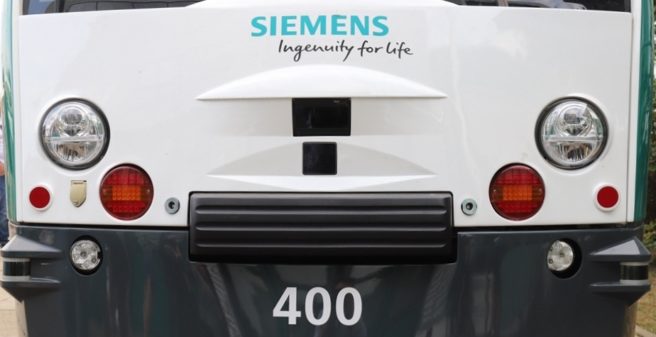 Siemens Mobility and ViP Verkehrsbetrieb Potsdam GmbH successfully demonstrated a test of the mFUND’s AStriD (“Autonomous Tram in Depot”) research project at a press conference on August 23rd. A consortium consisting of Siemens Mobility, ViP Verkehrsbetrieb Potsdam GmbH, the Karlsruhe Institute for Technology (KIT), the Institute for Climate Protection, Energy and Mobility (IKEM), and Codewerk GmbH began its joint research on a fully automated tram depot in October 2019. The technology is expected to be market-ready in 2026.

“AStriD is an important milestone on the way to achieving self-driving trams. Working with our partners, we are using valuable synergies to digitalize the depot and reduce time-consuming on-site shunting. By automating the depot, we can better support our customers in ensuring sustainable value growth over the entire lifecycle and guaranteeing the availability of their trams,” said Albrecht Neumann, CEO Rolling Stock of Siemens Mobility.
The research and development project is being implemented at the depot operated by Verkehrsbetriebs Potsdam.

“Autonomous driving along the tram route and within the depot relieves our drivers and increases the safety of our passengers and other road users,” said Uwe Loeschmann, CEO of ViP Verkehrsbetrieb Potsdam GmbH. “Autonomous tram operation in our depot with the AStriD system opens up the possibility of automated cleaning, supply and parking processes with central control and increased operational safety.”

Potsdam Mayor Mike Schubert: “This is an important, future-oriented project. The participation of the state capital and its transport company shows how the spirit of innovation is thriving in Potsdam. If this new technology can be used in the coming years, it could help transport companies modernize local public transport. That’s why we’re pleased to be working as a project partner of Siemens on what we believe is a pioneering development.”

At the InnoTrans 2018, Siemens Mobility and Verkehrsbetrieb Potsdam demonstrated a test tram operating under real road conditions on a section of Potsdam’s tram network. The research project that resulted from this initiative aims at developing a digital depot on the basis of self-driving trams. The technical feasibility of the concept will be demonstrated with autonomous service functions, such as moving a tram through a washing facility to a siding. Making depot automation commercially viable is thus a first stage of introducing autonomous driving. Right from the start, the project is considering the various legal and economic conditions that must be fulfilled for the approval and operation of an autonomously driving tram. The three-year project is funded by the Federal Ministry of Transport and Digital Infrastructure (BMVI) as part of its Modernity Fund (mFUND).

A video explaining the autonomous tram can be seen here:

The consortium partners have divided the project into different work packages. Siemens Mobility is developing the self-driving tram in the depot and the yard management system (YMS) that gives the tram its driving orders. In addition, it is working with project partner KIT to develop the digital map that is the basis for tracking the tram’s location within the depot.
ViP Verkehrsbetrieb Potsdam GmbH is providing the tram and the depot infrastructure, enabling access to all required data, systems, and facilities, and evaluating the project’s findings from the perspective of a depot operator.

The KIT Institute for Information Processing Technology (ITIV) is contributing its expertise in the specification and digitalization of depots, the automation of processes, and identifying the necessary data, and is supporting the development of the digital map.

The IKEM is analyzing and evaluating the legal and economic issues related to the project.

Codewerk specializes in industrial systems and, among other things, develops software for data communication on rail vehicles. In this project, Codewerk is supporting the communication between the tram and control center and is responsible for integrating parts of the depot infrastructure.

About the BMVI’s mFUND:
As part of its mFUND innovation initiative, the BMVI has been funding data-based research and development projects for Digital and Networked Mobility 4.0 since 2016. The project funding is supplemented by active professional networking between players from politics, business, administration, and research, and by providing open data through the mCLOUD portal. Further information can be found at www.mfund.de.