The revival of the emission-free trolleybuses in Mexico City 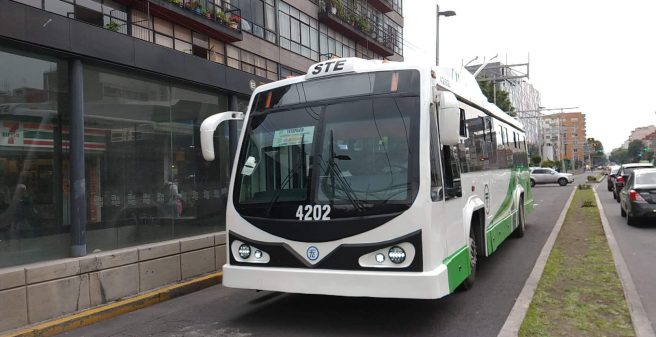 Since decades, Mexico City with its’ over 20 million inhabitants in the entire metropolis is known for its’ high pollution levels.

Although the air quality in the “Mexico valley” has widely improved since the peak of the 1980’s and 1990’s, traffic- and industry-induced CO2 and NOx emissions are still an issue. One of the main issues is that car ownership has been drastically rising: since 1990 car ownership doubled from roughly 2 to 4 million cars today. Public transport is struggling to keep up and is suffering from saturation and capacity.

The decay of Mexico’s trolleybuses

Alongside the 12 metro, 7 Bus Rapid Transit and single light-rail line (as a survivor of the once extensive tramway network), the city still operates a trolleybus system. The 8 trolleybus lines with a total length of 203 km are operated by the publicly-owned STE (Servicio de Transportes Eléctricos) which also operates the light rail line. Since the tramway became obsolescent in the 1970’s and 1980’s after the construction of the metro lines, the trolleybus was consequently developed as a feeder for the metro system. Additionally, three main trolleybus corridors were implemented with right-of-way lanes and a so-called “zero emisiones” branding including a higher fare (3 pesos instead of 2 pesos).

Over the past two decades, the trolleybus has been widely neglected in terms of maintenance, investment. The network used to have a length of 492.61 km in 2007 with 18 lines. In 2014, there were only 8 lines with a length of 203.64 km, equalling a reduction of a mere 41 %! According to official numbers, the fleet consists in the following 339 vehicles of which only 135 vehicles are operation (equalling 40 %). Service quality of the trolleybus system is suffering from the aging fleet and reduced fleet size. The oldest vehicles were built in 1975 and the youngest generation being in service since 1999. The following buses are currently listed in STE’s books:

Need to renew the trolleybus system

With the decreasing number of vehicles, frequencies, comfort and reliability of the trolleybus system have deteriorated drastically during the past decade. Logically, passengers numbers plunged from formerly over 200,000 passengers per day to 149,000 per day in 2018. Local newspapers have already been accusing the politics of neglecting the emission-free system for too long.

Things are now changing for the better. With the new city administration elected and in power since December 2019 under the leadership of mayor Dr Claudia Sheinbaum, an environmental engineer and part of the IPCC (Intergovernmental Panel on Climate Change) Nobel Prize laureates, investment in metro, trolleybus, lightrail and conventional bus has been decided.

A tender for 40 new trolleybuses

For the trolleybus, a tender for 30 new trolleybuses which has later been altered to 40 trolleybus, has been released in the beginning of 2019. In May 2019, Yutong has been selected as a supplier for trolleybuses. The total contract value is reported to be 290 million MEX (ca. 13.4 million EUR or ca. 334,000 EUR per trolleybus). The new trolleybuses will have a length of 12 m a passenger capacity of 84 – 90 of which 56 – 62 standing and 28 seating. Maximum speed will be 70 km/h. Additionally, the new vehicles will be equipped with Lithium-Phosphate batteries, allowing for a catenary-free battery range of 70 km, equalling three times the entire length of the “zero emission” trolleybus route A from North to South. The first new trolleybuses are expected to arrive in Mexico City in mid-November 2019. In early February 2019, one of the Yutong trolleybuses from Marrakech, Morocco, was shipped to Mexico City for some technical test rides. It is expected that Mexico City’s new trolleybuses will be based on the model for Marrakech which is in operation since 2017. The second bidder was local Mexican bus manufacturer DINA which has been testing a 12.4 meter Ridder E low-floor bus in Mexico City since 2016/ 17.

Modernisation of the 30-year old fleet

In July 2019, STE presented the very first modernised MASA-Toshiba trolleybus, originally built in 1981. The entire vehicle structure has been rebuilt including the front and rear of the trolleybus. The original Chopper GTC and thyristor electrical equipment remains the same. However, the acceleration and braking behaviour has been improved in such a way that the jerk has been significantly reduced in comparison to the other models. Named MASA S-500T, the modernised trolleybus 4202 started operations in July 2019 and is used as a prototype to analyse whether further modernisations of the MASA fleet are viable from both economical and technical aspects. The “new” MASA S-500 T is operated from Monday – Friday on trolleybus service D “Eje 7-7A Sur” from San Andrés Tetepilco to the metro terminus Mixcoac.

Further information (in German) of the Mexican transport system can be found in the current issue (7/8 2019) of “Stadtverkehr”: