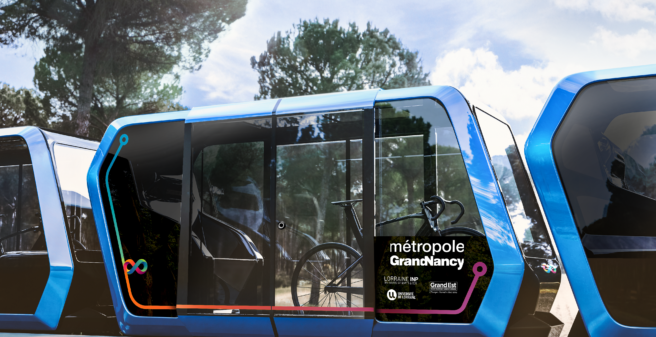 According to the current project status, this is how the mass-produced cabins will look like I © UrbanLoop SAS

Since our first report in February 2021, the implementation of the UrbanLoop personal rapid transit system, which will be fully automated and operate on demand is making rapid progress. It is intended to transport people in smaller urban centres, airports or shopping centres without waiting times and without intermediate stops and thus faster than any other urban means of transport. The necessary funding has been secured or is in the pipeline, the technology is nearing maturity, the approval process is proceeding promisingly, and two initial passenger-carrying applications have been decided.

UrbanLoop was not developed by railway experts but by professors and students of computer science who asked themselves how to find the optimal number of vehicles to run at a given capacity. For the same capacity, is it better to have one vehicle with 100 seats running once an hour, 10 vehicles with 10 seats running every 6 minutes, or 100 individual and readily available cabs waiting at stops? In addition to questions of feasibility, the environmental impact, investment and operating costs, especially personnel costs, energy consumption and passenger expectations must be considered. In the past decades, a number of systems were built around the world with small automatic cabins that had to run at long safety distances and thus only allowed low passenger capacities. Only since computer technology and artificial intelligence had reached today’s performance, a Personal Rapid Transit system for medium transport capacities such as UrbanLoop could be envisaged. Now the necessary software has been developed and tested in a pilot project, being the innovative core of the system and only thanks to it the expected performance of the system becomes possible. For copyright reasons this software is kept secret. As the software runs silently in the background; it is only interfacing with users through an app on the smartphone while the infrastructure and the cabins are visible to the outside world.

UrbanLoop means an undisputed advantage for passengers to get to their destination station without having to wait for a vehicle and without intermediate stops. Even though UrbanLoop aims to be faster than any other means of transport in inner-city traffic, it also strives to consume extraordinarily little energy. UrbanLoop claims to have set the “World Record for energy consumption per kilometre for an autonomous vehicle on rails” on 28 May in the presence of representatives of politics and the media. For one kilometre on the demonstration track, the UrbanLoop vehicle consumed 0.05 kWh and thus a cost of 0.47 euro cents per km at a top speed of 52 km/h. Owners of even the smallest automobile cars can only dream of such a value, urban buses exceed it several times over and only trams can reach it when they run fully packed with seated and standing passengers. Since the lightweight cabins pass the stations at line speed without stopping, the system’s energy consumption is unsurpassed. It has thus been demonstrated that no advantages are gained in terms of energy consumption by placing passengers together in larger vehicle units. The measured value was confirmed by Certifer, a EU designated body for the evaluation and control of safety in rail transport. French Transport Minister Jean-Baptiste Djebbari was also present at this demonstration of the system. He wanted to personally observe the progress of this futuristic project and praised the UrbanLoop team for the virtues of the system, which he described as “energy-saving, complementary to other modes of transport and accessible to people with reduced mobility”.

The author visited UrbanLoop in summer and was allowed to ride on the demonstration track. The first thing that stands out is how light and simple the basic physical elements of the system are, and in particular the track body and passive turnouts. Although the mechanics and drive unit of the chassis seemed to be robustly designed, it was apparent that the passenger cabs of the demonstrator vehicles are too light and therefore vibrate quite uncomfortably, and that the automatic doors are not yet fully developed. Making these elements ready for series production will probably involve a lot of extra weight. What is essential and system-defining, however, is the underlying computer science, and you get a striking impression of this when you see how up to four cabs travel together as a group at a short distance of around 4 metres or 0.25 seconds between each other at 60 km/h, an ability that is important for the overall capacity of the system. Currently, the Urbanloop system has a technology maturity level (TRL) of 6 on the scale of 9. This means that the system works under real conditions with the automatically travelling cabs operate autonomously at real speed of 60 km/h on the 1.2 km demonstration track.

In recent months, further technical development steps have been taken. Thanks to the low wheel loads of the cabs, the tracks do not require a heavy substructure. They can practically be laid directly on the existing subgrade. To facilitate their efficient installation, they are prefabricated in 10-metre-long elements that can be joined together on site, just like on a model railway. In this way, up to one kilometre of track can be laid in two working days. For series production, robust self-supporting steel cabins to be installed over the underframe are now foreseen, which also means that the double doors that are designed in the shape of an inverted “U” and thus simultaneously open up the entry and exit sides, are operating on a solid structure. As a particularly safety-relevant and failure-prone element, the doors will be designed in accordance with the standards for elevators if approved by the French certification authority STRMTG.

It can therefore be seen that UrbanLoop is feasible and will meet the expected goals in terms of attractiveness for the user and technical feasibility. For a successful market launch, however, more is needed, namely sufficient funding for the development and a customer application with public traffic.

While the system fundamentals, in particular the control software with artificial intelligence, were developed within the framework of the Eastern French universities, the project was then continued in 2019 as a Simplified Joint Stock Company (SAS) start-up under French law under the name UrbanLoop SAS and its activities must be funded. Hitherto UrbanLoop SAS has already received €1.5 million in venture capital from several investors. The main shareholder is Yeast, a regional venture fund for digital projects. UrbanLoop SAS now employs a team of 10 engineers.

Based on the theoretical principles developed so far, the demonstration installations and the constant exchange with the approval agency, no less than two political authorities have each decided in favour of an – albeit short – UrbanLoop route with public transport. In 2024, for the Olympic Games to be held in and around Paris, a link between the Olympic Vélodrome, car parks and the aquatic stadium will be put into operation on the territory of the municipality of Saint-Quentin-en-Yvelines. This line, with 2.2 km of track, three stations and 10 cabins, and thus a transport capacity of up to 240 passengers per hour, will continue to operate on a limited basis until April 2025 after the end of the Games. A later extension to the Saint-Quentin-en-Yvelines RER rapid transit station could be envisaged. This line will be operated automatically; however, as an initial application, it will be permanently monitored by on-site staff. The aim is to achieve the technical maturity level 8 out of 9. A consortium consisting of UrbanLoop SAS, the Saint-Quentin-en-Yvelines regional authority and Keolis to operate the system has been formed for this project. The project costs amount to around €5 million, of which more than €3 million is to come from subsidies.

The next stage, full technical maturity and thus marketability, is to be realised in the following year 2026. On 25 November 2021, Nancy approved and budgeted an UrbanLoop route of approximately 2 km with 3 to 5 stops as part of its transport plan, which includes the replacement of the TVR guided bus line with trolley buses. After a study and a period of public consultation, Nancy included this UrbanLoop infrastructure in its mobility plan. This is planned on a former SNCF railway line that has been disused for years and runs through the middle of the city centre. The system’s narrow width and low noise pollution of 63 dbA at 50 km/h will allow the simultaneous creation of a bicycle and pedestrian path. The project will connect a park-and-ride lot to the downtown area for quick access without a car. Planning is now underway.

Very Interesting system, looks like something that could actually work and be used to transport people. I dont think that this could replace buses or railways and trams. But its a good idea for places like airports, shopping centers, theme parks or other large complexes were buses or railways and trams would not be profitable. There could be stations for differnt gates in an airport for example.

The only thing that could be a problem is saftey. Normal railways and Trams have multiple hardware saftey systems (including signals etc.), wich prevent trains from entering an occupied track segment. It sounds like this would not be a problem, since its autonomus and controlled by software. But only relying on software seems a bit risky if the cars move 52km/h. What if there is a software error or the control network suddenly goes offline? Or if one of the cars breaks down on the track?

There is nothing in the article regarding this topic, but i dont think the the developers havent thought about that.

The system is much better than things like the “ottobahn”, wich are just to complex.

Dear Busdriver001, you are absolutely right when you say that Urbanloop will not replace trains or trams (or metros). Trains are long-distance with medium to high speeds, trams and metros are high-capacity (~ 2000 – 25000 PPHD) urban systems, Urbanloop intends to be a low capacity (max 3000 PPHD) transport system for smaller cities or suburbs, and, as you say, airports, shopping centres, theme parks, and yes, there it will positively replace urban buses.

But I have to contradict you, safety is at the core of Urbanloop, and they are in close contact with the French safety authority STRMTG and have received preliminary approvals. Traffic management is done at two non-safety levels, and there is a third safety level where the cabins communicate directly between each other and exchange their position and speed information about 10 times every second- This allows for headways as low as 3 m or 0.2 s at 60 km/h. The details are part of their non-disclosed propriatary know-how. Please also note that all cabins are running in the same direction, so head-on collisions are excluded, and that the system operates in a fully segregated environment, as do automatic metros.