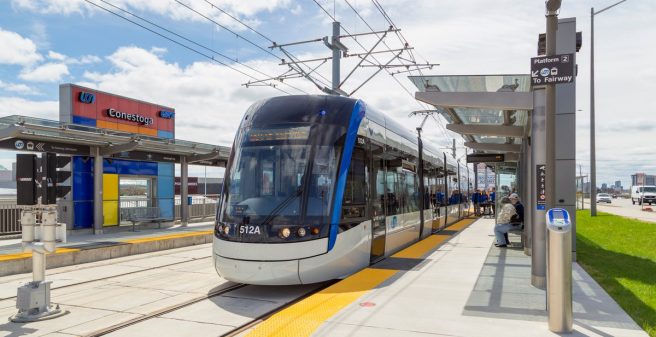 On 21 June 2019, the Canadian City of Waterloo opened its first light rail line. Called Ion, stylized as ION, the new line operated by Keolis and will be part of the Grand River Transit (GRT) system. The light rail will supplement and partially replace the existing Route 200 iXpress bus service.

The first phase has a length of 19 km and runs between Conestoga Mall in the north of Waterloo, Ontario, and Fairview Park Mall in the south end of Kitchener. In Kitchener, an interchange to the Bus Rapid Transit has been put in place which runs 17 km to Cambridge. A future extension to the downtown Galt area of Cambridge (Phase 2) in order to replace the BRT service is planned but construction is not likely to start before 2025.

The total cost of the system was estimated at 818 million CAD (ca. 546 million EUR), but in December 2017, the overruns were estimated to total approximately 50 million CAD (ca. 33 million EUR). The initial opening date of the system was planned in 2018. Due to delays in the delivery of the rolling stock, it has been eventually postponed to 21 June 2019.

Bombardier Transportation supplied 14 FLEXITY Freedom light rail vehicles (LRV) to the Regional Municipality of Waterloo. The FLEXITY Freedom LRV is the next generation of the highly successful FLEXITY modular light rail platform and has been adapted to meet North American standards. The five-module, 100% low-floor vehicles are 30.2 meters long and 2.65 meters wide. Each vehicle has a capacity for more than 280 passengers.

In terms of operation, the Ion light rail has a specific scheme. Freight trains of the Goderich–Exeter Railway use the shared portion of the Waterloo line between 1 am and 5 am when the light rail system is not in operation. Since freight cars are wider than the LRVs, there are so-called gauntlet tracks (with 4 rails) at most of the Ion stations along the Waterloo track. This ensures that the freight trains can pass the stations platforms without touching them. In order to protect the station platforms and catenary system, a detection system for oversized freight cars has been installed. It detects them automatically and stops the train using derailers.

A schematic map of the LRV and BRT system can be found here: