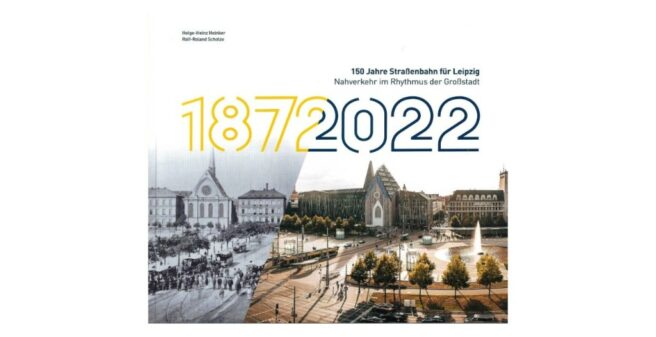 On the occasion of 150th anniversary of Leipzig’s large tramway system a new book was published, written by two well-known experts on the subject. It was available in two versions: hardback and paperback. The former was sold out shortly after the anniversary. However, the form of the binding has no influence on the design and content. In the reviewer’s opinion, the Leipzig publication, which is easy to handle in terms of format and size, is the most successful of the four anniversary publications. Based on the realisation that local transport is the engine of urban development, a city historian and a transport historian have worked together on the subject. In seven steps, the path from 1872 to 2022 is presented in time periods. Until 1945, the development hardly differs from that of other large cities in Germany: horse-drawn trams, introduction of the electric tram, growth of the city and the transport network, the First World War, blossoms and setbacks with a fundamental upward trend in the 1920s and 1930s, and the road to ruin until the end of the war in 1945.

From then until the end of the 1980s, development under the planned economy of the GDR was fundamentally different from that in West Germany. With reunification in 1990, the first task was to catch up and adapt to the new conditions, while the last 25 years, as in other companies, were marked by the introduction of low-floor technology and the modernisation and expansion of the network. In each chapter, the developments of the city and transport are clearly described in short, well-structured texts and documented with numerous illustrations. A technical section with information on the vehicles procured in each case, their appearance and a table with data on years of construction, numbers of units, manufacturers and dimensions concludes each chapter. A separate section is devoted to the depots since 1920 in the last time block. There you will also find plans of the network development. Of course, the fact that Leipzig also has a large collection of historic vehicles, which provide a good overview of the development from horse-drawn trams to the present day, is not forgotten. Since the tramway is celebrating its anniversary, it is the only one covered.
The well-designed and content-rich publication is concluded with an appendix containing, among other things, a chronological compilation of the most important events, but also information on changed names of streets and squares, an extensive list of sources and a picture credits. The publication also manages the balancing act of offering something for both the city dweller and transport user as well as the expert and transport enthusiast. In short, an anniversary publication as it should be. Also well suited as a supplement to the not exactly few previously published literature with an update to modern times.